Posted By: Adminon: August 31, 2017In: Other ProjectsNo Comments
Print Email
Share this:

Plant watering system evolved through various stages where primitive irrigation systems possess many drawbacks as it fails to conserve water and human energy. So introducing Automation in it can help us to overcome these drawbacks and pave way to conserve water. This can be done with a simple Soil moisture sensor and a Microcontroller, AVR in our case. You can try out this system to automate watering the plants in your home at affordable cost. 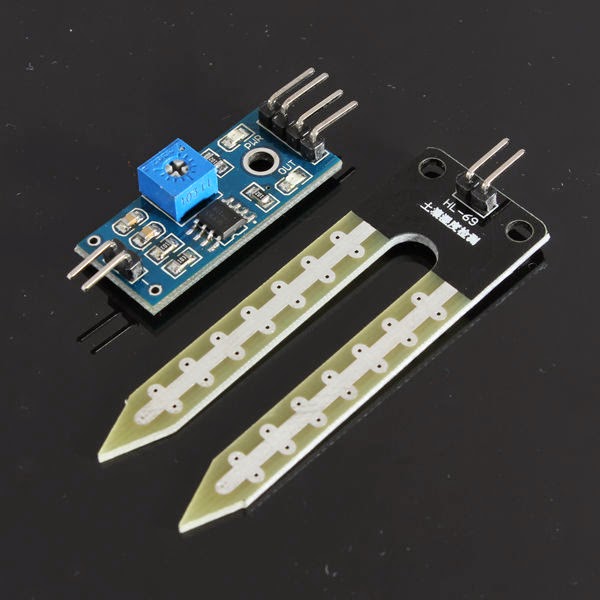 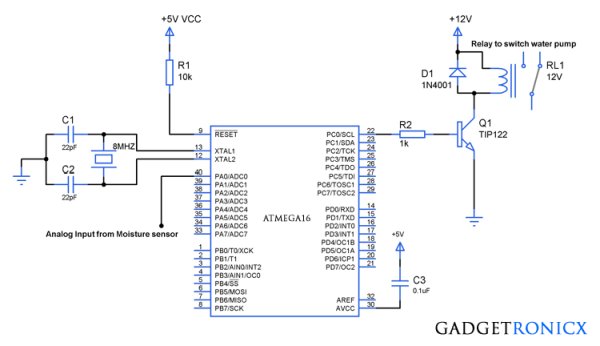 Here we are going to employ a Simple soil moisture sensor KDQ11 which you can which you can buy from ebay. This sensor is associated with comparator LM-393 so whenever the soil is moist the sensor gives low signal as output and high in the case of dry soil. The analog output from this sensor module is fed to the A/D pin of the controller for conversion.

For those you cannot get Soil moisture sensor, you can make one by your own, it may be unorthodox but will be effective. Insert two wires to the dry soil and measure the resistance of it. And again repeat the same by pouring some water to the soil (moist condition). Now you have to built a voltage resistor network using a resistor and the soil. Here the soil acts as a potentiometer which varies its resistance based on its condition.
Calculate the resistor value you are about to use based on the resistance you have done before in wet and dry condition. And determine the trigger point in which you system have to switch the pump on.
And last but not the least Pump actuator, use a relay which is capable of switching heavy load such as pumps. The power transistor TIP122 is used to switch the Relay On/Off based on the moisture content of the soil.
Read More:  Automatic plant watering system using AVR(Atmega16) Microcontroller

Adding ADC to Microcontrollers without ADC

I recently had the need to carefully measure a voltage with a microcontroller which lacks an analog-to-digital converter (ADC), and...