Analogue to Digital Conversion on an ATmega168

Many AVR microcontrollers are capable of doing Analogue to Digital Conversion. The ATmega168 has 6 ports (8 ports on the SMD packages) that can be used for analogue input. This tutorial shows you how.

The Atmega168 has 2 digital supply voltage pins, VCC and AVCC. AVCC supplies power to PC0-PC5. When these pins are used as analogue inputs, the AVCC power needs to be very stable. This is achieved by using a low pass filter comprising of an inductor and capacitor.

The AREF pin is used to set the voltage that corresponds to a 100% value (1024) in the AD converter. In this example we tie it to AVCC. 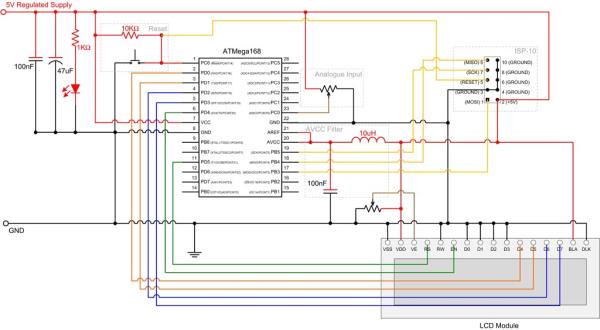 Read More: Analogue to Digital Conversion on an ATmega168

by Derek Hildreth – Technologic Systems This comprehensive and easy to read example C code is designed to work alone...