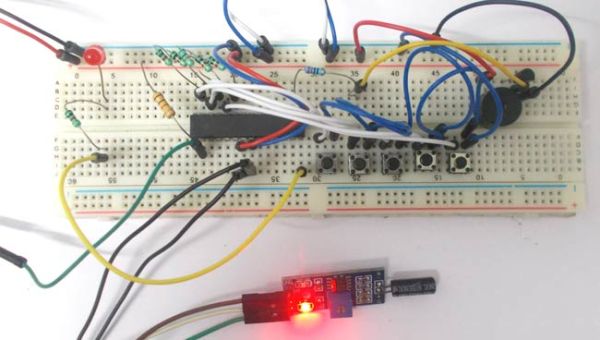 We can see there is a cylinder in the picture, in that cylinder there will be a freely moving metal ball. At the bottom of the cylinder there will be two metal contacts. So when the sensor is moved the free falling ball makes contact with conductors at bottom making a short circuit. This short circuit will be sensed by op-amp in the control circuit. As a response to the tilt the op-amp shows a high output.

We are going to give the tilt sensor signal to ATMEGA8 for appropriate response.

As shown in circuit, there is no need to connect an external crystal here. Because the ATMEGA works on internal 1MHz, Resistor-Capacitor oscillator on default. Only when the accuracy of clock is needed, as application of high precision counting, external crystal is attaches. When the controller is first bought, it is fused to work on internal crystal by default.

The ATMEGA8 fuse bits are not touched here, as we don’t need accuracy the default 1MHZ internal clock is enough in this circuit.

Once there is vibration the sensor sends high pulse to ATMEGA8. Once high pulse is received the controller will be programmed to send a alert by turning the buzzer ON which makes noise.

Hence we will have a THEFT ALERT system by using ATmega8 Microcontroller.