Overview
The circuit shown in Figure 1 is capable of driving an LED array requiring up to several amps with a burst of flashes before coming on until power is removed. It is intended to be used as an auxiliary warning light driver. The initial burst of flashes is meant to enhance visual detection of the indicator coming on.
Circuit Description
The circuit in which this circuit is intended to be installed is a circuit such as a brake warning light in a car. It has no power applied until the brake light switch is closed and goes dark again when the switch opens. When power is first applied to the circuit, the LED array comes off, then blinks off several times before coming on to stay.  Below is a description of the circuit. 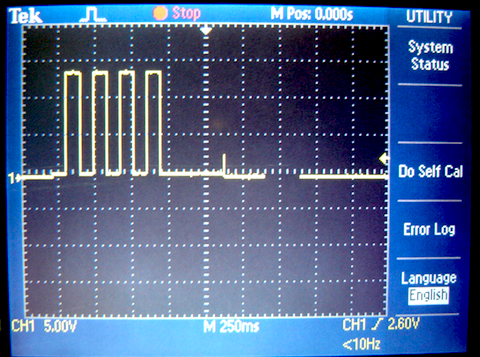 On the left is D1, a Zener diode shunt regulator which supplies 5 volts to counter chip U1.
U1 contains and oscillator and several stages of  counters, each successively dividing the its input signal by 2. The output of the first stage that leaves the chip is that of the 4th counter stage. Its frequency is 1/32 that of the oscillator. Output Q4 directly drives Q1, which when “on” (That’s when U1 output Q4 is low) turns off the output transistor, Q1.
Connected to the 5 volt supply are C2 which provides a reset pulse to the counter when power is applied. This is necessary to make the counter start at zero. D4 helps discharge C2 quickly so that the circuit can be switched on and off in quick succession.
So, when the power is first applied to the circuit, Q2 turns on, causing the LED array to come on. After the reset period which is a little less than 100 ms, the pulses into Q1 cause Q2 to shut off current to the LEDs four times before coming on to stay on. The circuit comes to a “stop” when Q7 goes high, which stops the oscillator in a state in which Q2 is left on.

(Phys.org)—Research seeking to improve the features and functions of robots has made impressive gains with prototypes of robots that can...