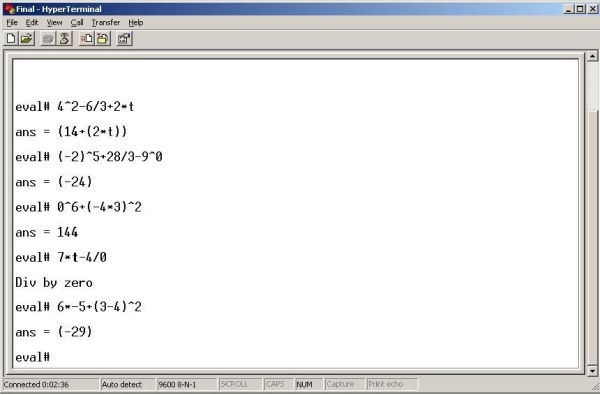 CalcParser takes expressions in the common operator notation frequently used to express mathematical equations in computing applications. The order of operations is as follows with the top of the table having the highest precedence :

The way CalcParser evaluates expressions may be different with other implementations. We do not implement floating point expression evaluation so the result is returned as zero. Some cases are listed in the following table:

The program runs on a state machine with two states. These states correspond to the two functional modes: Evaluate and Differentiate abbreviated on the hyperterm prompt as eval and diff respectively. As the names suggest, these functions are used to distinguish between the two procedures: evaluation of an arithmetic expression and the differentiation of an expression. The user can switch to either of the two modes by using the command ‘diff’ or ‘eval’.
The scanner reads the input provided by the user once the serial read buffer is ready. The parser then parses the expression according to the pre-determined syntax. The parsing results in the formation of a tree structure with a root node and a variable number of other nodes. The following functions are used to give a logical structure to our code.
Scanner Functions

Since our project requires dynamic memory allocation, memory constrants of the Mega32 is the biggest tradeoff for portability.

CalcParser utilizes the RS232 standard for serial communication. No patents, copyrights, or trademarks were violated.
Program Design
The project uses a parser designed for the purpose of understanding the user input in a mathematical expression syntax. The usefulness of the project is further enhanced by the usability of the syntax. The scanner scans the input and uses the parser to interpret the expression and create an Abstract Syntax Tree. The program is designed to detect the following errors:

Interrupts are used to alert the system when a packet is received or transmitted so that no blocking occurs. Global variables r_buffer and t_buffer were declared as 60 and 40 element arrays respectively. When the USART receives a character from the PC, the interrupt is run and the character is stored in the r_buffer. After the carriage return \r is received signifying the end of the string, the receive interrupt, UCSRB.7 is set to zero. At the same time a 1 bit flag, r_ready is set to 1.
User Control Specificaions
User commands are as follows:

The parser is implemented using a push-down automaton which converts the symbols to an abstract syntax tree by recognizing a context-free language. We implemented a recursive desent LL(1) parser for this project. The first L stands for read left to right. The second L stands for reduce left to right. The number one (1) in parenthesis stands for one symbol lookahead. EBNF (Extended Backus-Naur Form) is the common notation used to express context-free grammars. Below is an example of the abstract syntax tree generated by the parser and the EBNF notation for the context-free gammer.

The Clapper was a popular gadget in the 80's and 90's. It let you turn appliances on and off just...