If you have played games on console you must be knowing what a joystick is. In games a joystick is generally used to control the motion of character or a vehicle (like plane or car). Joystick give a very realistic two dimensional control! Joystick are also used to control the motion of real objects like a robot or a car. Generally we want to control the back and forth motion of any object along with the ability to make it turn left and right. For this we use a common joystick with two axis. The y axis is used to move the object forward and backward, while the x axis is used to turn the object left or right. The type of joystick we are using in this article is an Analog Joystick that means it can give the magnitude of motion along with the direction. For example you can push the joystick little forward to make you robot start moving forward slowly. You can push the joystick further up to increase the speed of forward motion faster. Similarly you can control the speed of robot while making a reverse motion. Turning magnitude can also be controlled in the same way by moving the joystick left or right. 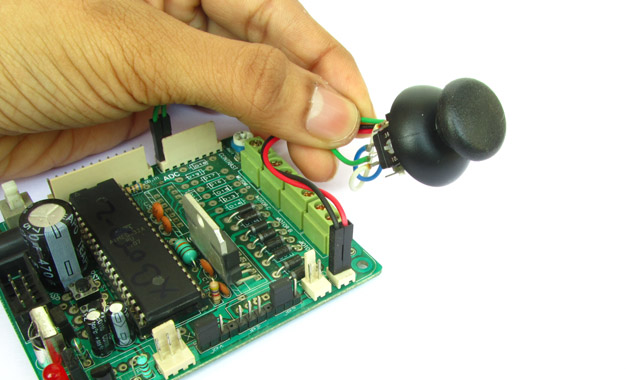 The joystick is wired as described in the image below. The two extreme points or both the variable resistor are connected to Vcc and Ground respectively. While the central pin provide output, which is connected to ADC input channel.

Whats PCB and Order it online

URL: https://www.orderpcbs.com a marketplace where engineer and board houses connect and collaborate to create the world's newest ideas a one-stop-shop...