“Keyboard mania gives users an opportunity to learn and gain a unique taste of playing an electronic piano without the presence of a music teacher.” 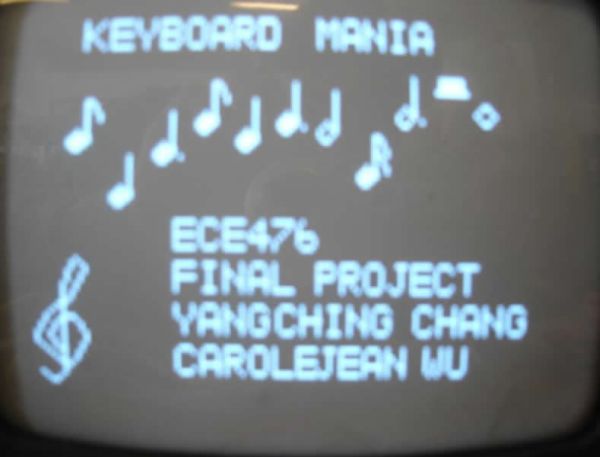 Summary of our Project

Rationale and Sources of our Project Idea

In the recent decades, we are able to transform analog signals of musical instruments to digital music. With advancement in technologies, we can create, record, and edit music using a computer. As well, we can mimic the sounds of music instruments, such as electronic guitar or piano, with today’s technology. Therefore, we decide to design an electronic musical instrument, called keyboard mania. Our keyboard mania has wide applicability as it not only serves as an electronic musical instrument, but also could enable users to practice piano scores in a virtual classroom without the presence of a piano teacher. It provides users a rare opportunity to gain a unique taste of what it is like to play an electronic musical instrument. In addition, the design would save on human resource, music teachers, since users can practice on their own with video and audio results output on the TV. Last but not least, our keyboard mania is very economical, but yet provides a relatively good sound quality and a user-friendly interface. It gives students, who begin to learn piano but cannot afford a YAMAHA keyboard/piano or piano lessens, a chance to learn piano on their own.

Explanation of our Project

The keyboard mania displays its menu through HyperTerminal on the PC where users can first choose one piano score to practice using the computer keyboard and the welcome page on the TV screen. After the user enters his/her choice of piano score in HyperTerminal, the chosen score will be displayed on the TV screen. He or she can start to play the chosen piece of piano score by pressing the ‘s’ key, which stand for start, or to exit at any time by pressing the ‘q’ key, which stands for quit. When starting the piano score, the user has to follow the pacer, functioning as a tempo guide, below each note on the piano score and to play the correct key, such that middle C is ‘A’ on the computer keyboard and so on.  Program/Hardware Design] If the user hit the wrong key, the keyboard mania will display ‘x’ above the corresponding note on the TV screen; otherwise, the keyboard mania will display check mark above the corresponding note on the TV screen. At the same time, the user can listen to notes, which he/she plays using the computer keyboard. As a result, he/she can correct himself/herself when a wrong key is hit or when playing too fast/slow. After the user finishes the chosen piano score, the keyboard mania will display a brief evaluation report stating his/her current piano skill, his/her score, and the highest score of the chosen piece on record.

There are four pre-coded pieces of piano score stored as matrices in the flash memory. Each note is represented by two integers. The former integer indicates music note and the later integer represents the note’s duration.

The keyboard mania uses the computer keyboard, the HyperTerminal on the PC, the Mega32 MCU, and the TV as its I/O devices. The interaction between these I/O devices is presented in the flow chart on the right. The HyperTerminal on the PC communicates with the serial ports on the STK500 development board. At the same time, programs are compiled using CodeVision on the PC and loaded to Mega32 MCU on the STK500 development board. Then the audio and video signals generated by the MCU are connected to analog circuits on the breadboard and output through the TV. 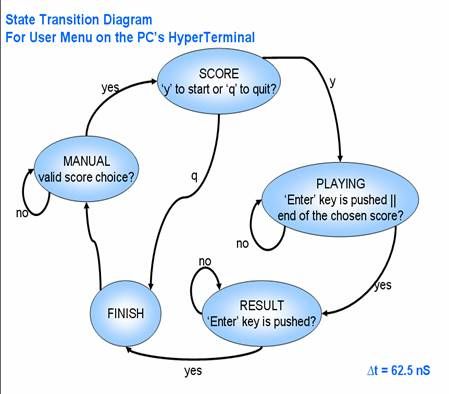 One software tradeoff of our keyboard mania is that the conversion calculation from input of computer keyboard to the corresponding note’s frequency. The floating-point calculation usually takes too long which cannot be finished within one frame time; therefore, we have to store it as char, but instead of float, where the conversion is done faster but the frequency accuracy is sacrificed.

For complete RS-232 standard, refer to

NTSC, which stand for National Television System Committee, is the analog television system used in the United States . Using the NTSC standard, frames are refreshed about every 1/30 second with interlacing technique, meaning odd and even lines are redrawn at about 60 frames per second.

With regards to intellectual property, we do not find any existing patents relative to our keyboard mania.

In order to ensure completion of arithmetic calculation and drawing on the TV screen at the frame rate, we have to distribute tasks to different lines as follows:

Hybrid car sales have taken off in recent years, with a fuel-sipping combination of electric- and gas-powered technologies that simultaneously...