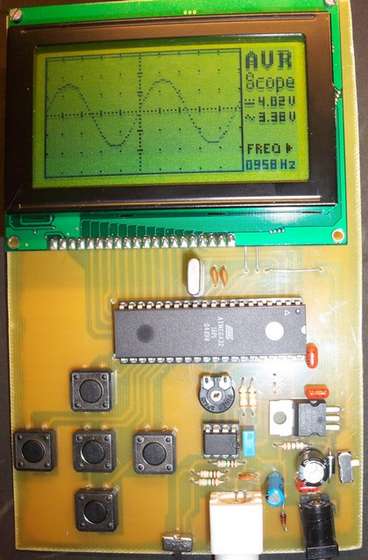 >> The firmware was updated on 19 Mar 2011 <<
A few months ago a friend of mine -car mechanical at profession- told me that he had problem with some car sensors. He couldn’t check, with a simple multimeter, if a sensor was working properly. I advised him to buy a LCD oscilloscope instead of a normal oscilloscope, because of its small size. The use of an oscilloscope is very helpful because you can see the waveform that is produced by a “healthy” in-circuit-sensor* and you can compare it with the waveform of a “suspect” in-circuit-sensor.
After that, he told me that this oscilloscope costs a “fortune” for him as he has a small car service shop. I offered to help him by designing and constructing a small, cheap and workable LCD oscilloscope for him.
*in-circuit-sensor is the sensor which is connected on a board (PCB) or it’s connected somewhere in the car. It’s not a disconnected sensor.
You can download the source code, hex, schematic diagram,PCB and picture of the circuit .

As the circuit has to be constituted by a few and cheap components, I chose the DEM128064A graphical LCD based on KS0108 controller chip to display the measured signals. The ATmega32 microcontroller is chosen because it has a lot of IN/OUT pins and a 2kB RAM size. 1kB is needed from gLCD and some bytes of the rest 1kB are used in C source code as registers. Because my oscilloscope has to read both AC and DC currents and at the same time it should have a High input resistance, I chose to use an LM358 which is a dual operational amplifier. The rest components like LM7805 , capacitors and resistors are very common and I won’t refer to them.

The prototype was made on a dual breadboard and the microcontroller was placed on an STK500 development board (see photo). I haven’t taken any photos from the prototype board. So, I can show you only the boards without the components I used on them.

Step 4 Putting the components in order

The breadboard circuit was temporary. It was the time to make the PCB for my AVR oscilloscope. The software that I used to draw the PCB is the Sprint layout 4. It is a really easy-to-use, cheap and efficient software to make your own PCBs.
I made my PCBs by myself by using toxic chemicals. That’s why I don’t describe the procedure. It’s very dangerous. I suggest you to give the transparency that you will print to a professional to make the PCB for you.
For more Detail: Low speed AVR oscilloscope V2.00 (Is updated on 19 Mar 2011)