It detects stationary and moving people just like a PIR, but it can do that also behind doors and thin walls, by taking advantage of the Doppler effect. 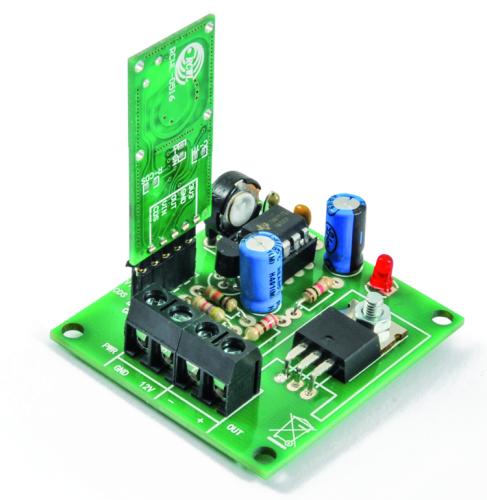 The detection of people, animals and hot bodies in general has been done for years using passive infrared radars, also known as PIR, which work by placing a pyroelectric sensor, so a heat sensor, behind a Fresnel lens, which has the ability to focus on just one point the infrared rays coming from the frontally detected heat, emitted by moving objects within a certain angle.

PIR sensors cover a wide array and variety of applications and represent by now a low-cost solution to protect ourselves from home invasion, automatically activate utilizers when moving people are detected etc., although they have the limitation to be able to detect only whatever can be seen: they cannot detect, even at a short distance, people moving behind doors and windows, so if we employ them in a home security system, they will only be activated when the intruder is already inside the room where the sensors are installed.

In order to have a preemptive protection, we can make use of radiofrequency sensors and, to be precise, microwave sensors, because they can detect people behind doors and even walls as long as they are not too thick or made of reinforced concrete or metal, or walls containing metal plaster reinforcement grids (for bladder walls) or cavity for sliding doors such as Scrigno.

Microwave detectors can be monostable (like ours) or bistable, meaning they are mounted as a couple one in front of the other; in this case, emitter and receiver are placed in separate units. Monostable units define a detection area based on the microwave beam they emit and the coverage can reach up to 300÷400 linear meters, besides, we can configure it to the RF beam to adapt to special situations, so we can lengthen it or shorten it, make it smaller (in order to have a longer beam) or make it wider (which means a shorter distance but a bigger angular coverage).

READ  Inside the iPhone 5S and iPhone 5C

The Omega2 LTE is a Linux IoT computer with Wi-Fi and LTE cellular connectivity. Effortlessly deploy your existing IoT applications...