POV Cylinder with Arduino Due

This is my first Arduino project. My work was inspired by several maker projects that created Persistence of Vision Displays [2,3,4]. 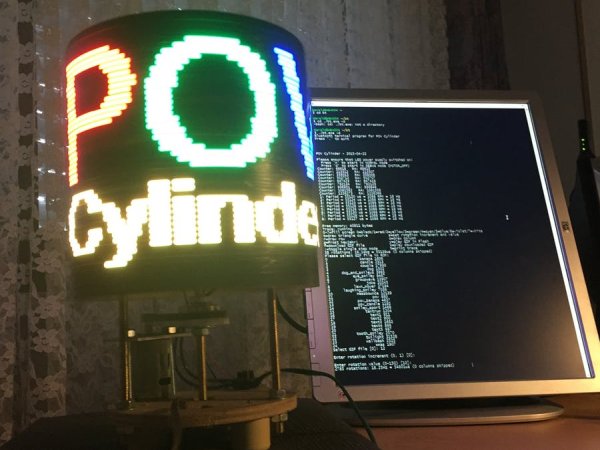 Persistence of vision (POV) refers to the optical illusion whereby multiple discrete images blend into a single image in the human mind and believed to be the explanation for motion perception in cinema and animated films [1].
The projects [2,3,4] implement POV globe displays, using discrete LEDs and discrete shift registers. Instead my device is using a rotating cylinder and off-the-shelf RGB LED strips as POV Display.
The main features of my POV Cylinder are:

The mechanical construction is shown in the drawing below.

The device comprises a chassis and a rotor. The chassis consists of two circular plywood disks which are connected via three threaded bars. The distance between the disks is 120 mm. In the middle there are two ball bearings and the shaft. For the shaft also a threaded bar is used. The shaft is driven by an electric motor via two crown gears and a toothed belt. The rotation speed is up to 1300 RPM (22 Hz).
The rotor consists of two styrofoam cylinders and two circular aluminium disks. The styrofoam cylinders are glued to the lower disk. The upper disk can be removed. It is used to attach the rotor to the shaft.
For more detail: POV Cylinder with Arduino Due

The potential competitor of ESP8266 wifi module will be available next week for just $2! Pine64, the manufacturer of the...