In this project we are going to use one of the features of ATmega32A to adjust the brightness of 1Watt LED. The method that is used to adjust the speed of  LED is PWM (Pulse Width Modulation). The method of PWM is explained here. Consider a simple circuit as shown in figure. 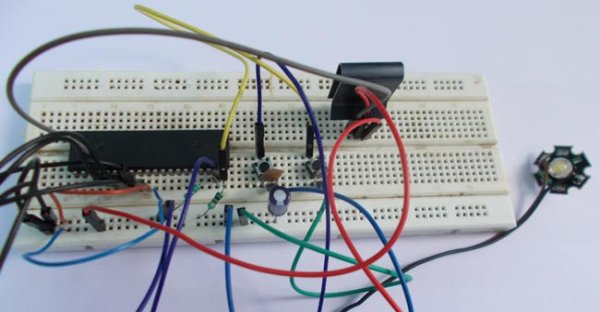 Now if the switch in above figure is closed continuously over a period of time then the bulb will continuously on during that time. If the switch is closed for 8ms and opened for 2ms over a cycle of 10ms, then the bulb will be ON only in the 8ms time. Now the average terminal over across the over a period of 10ms = Turn ON time/ (Turn ON time + Turn OFF time), this is called duty cycle and is of 80% (8/ (8+2)), so the average output voltage will be 80% of the battery voltage.

In the third case the duty cycle is 20% and the average terminal voltage is 20% of the battery voltage.

In ATMEGA32A we have four PWM channels, namely OC0, OC1A, OC1B, and OC2. Here we are going to use OC0 PWM channel to vary the brightness of the LED.

The above figure shows the circuit diagram of LED dimmer.

A capacitor is connected to each of the buttons to avoid bouncing. Whenever a button is pressed there will be some noise at the pin. Although this noise stabilizes in milliseconds. For a controller the sharp peaks before stabilization acts as triggers. This effect can be eliminated either by software or hardware, for the program to be simple. We are using hardware method by adding debouncing capacitor.