Our project is inspired by the commercial product, PicoDopp, which uses a similar scheme for foxhunting. Foxhunting is a contest where participants try to locate a transmitter, called the fox, simply by monitoring the signals it transmits. 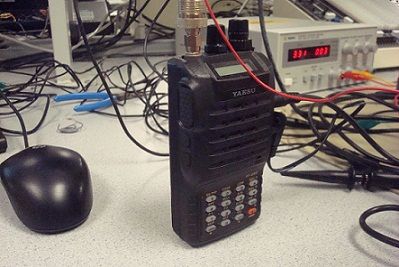 Typically this is done using highly directional antennas — antennas that only receive signals from one direction. However, over short distances, especially within distances less than a mile or so, reflected signals can make these systems difficult to get accurate readings from. The only way to overcome this limitation is to use systems that do not rely on magnitude measurements.
We switch between antennas to simulate sinusoidal multiplication. We then measure certain frequencies our switching scheme injects into, which allows us to measure the phase difference between different antennas. Using the phase difference we can calculate path differences, and thus generate an estimate of where the signals are coming from.
We used multiple antennas to measure phase changes over different path lengths to get a bearing on a selected FM radio station. The image on the left shows the antenna we built for our project.

So we are receiving 100 MHz antenna signals from our antennas, then the antenna signals are amplified by an analog circuit before they go into the mux. The outputs of the four muxes are combined and the combined output goes into the XOR multiplier. We use a Si 4840 radio chip as the receiver. Every time the control signal from the microcontroller will choose the output from one of the four muxes, and the chip will choose the correct frequency to multiply with the output from the mux block, and does the multiplication. Since we are only interested in frequencies at 1 KHz, we use a band pass amplifier to filter out the signals that we want, and pass this signal to the ADC to the microcontroller. The microcontroller also generates PWM signals which are the control signals to select which mux output will go into the receiver, and this performs the switching which is an essential step in simulating the doppler effect.

There is a significant hardware/software trade off in our project. We are receiving 100 MHz signals from our antennas, and due to the high frequency of FM signals, it will be very difficult for us to deal with the signals using software due to the limitation of sampling frequency of the microcontroller. The microcontroller can not be sampled fast enough to meet our requirements of computation. Therefore, we introduce several analog circuits and a Si4840 radio chip into this project, which help us to perform filtering, amplifying, switching and multiplications of the signals. What’s more, we need to perform fourier transforms and this is hard to be done using analog circuits, therefore we switch to programming using microcontrollers instead of using analog circuits to perform filter transforms. We need to sample at at least 2 kHz in order to do the fourier analysis.

This figure shows our basic connections between the Si 4840 chip, Microcontroller and the LCD screen. The overall connection could be find here.
As shown above, we use function generator to power the Si4840 chip because the chip works at 2.0 to 3.6V.
When we were stuck in our project, we chose to switch to a more powerful RF receiver as shown above.

The antenna
The antenna was designed and built with the help of a friend of ours, Dana Hartsig.  First, appropriate lengths of aluminum and PVC pipe were purchased and cut. We then connected them using *** Gap filling material ***. We sealed the joints with super glue.
To turn our device into four antennas that can be selected individually, we had to solder the included circuits to them. The amplifiers (shown below) were place as close to the antenna as possible to avoid any losses over the length of the wire. Then equal stretches of wire were connected to a central multiplexer (shown below). We needed equal wire lengths because different path lengths could lead to unwanted phase shifts on the signal. 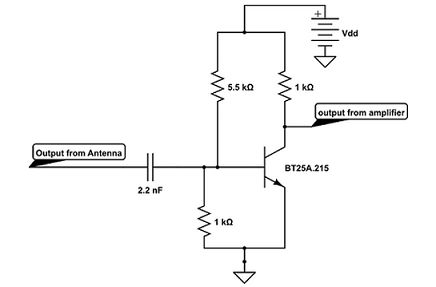