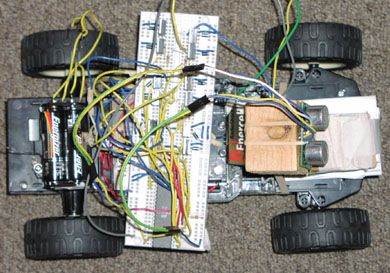 A method of early collision detection and avoidance could curb several of the accidents that may be related to factors such as loss of control, careless driving, sleepy/drunk drivers, and not paying attention to the road. Although it is not a standard safety feature in any car on the current market, the use of sensory equipment to detect potentially dangerous objects a certain distance away and either slow the car down or steer to a safer path has not been released.
Our project was to take a remote controlled Humvee vehicle and add an ultrasonic sensor to it. Simulating a possible advancement in safety/security systems in cars and automobiles, the R/C Humvee and Sensor would be able to operate normally until the sensor detects a possible hazard. In our case, the sensor would face forwards until the car came within ~4 feet of an object, at which time user control would be disconnected from the motor, the sensor would rotate to find the safest path, if any (or back up if there was none), and steer towards that path.
The “smart” logic of the car would be controlled through an Atmel Mega163 programmable chip, which we coded for the project. The recieved commands from the “driver” (the remote control) would pass through the Mega163, and the Mega163 would determine the car’s best course of action based on the results of pulses from the sensor. The Mega163 would then drive the car motors as well as recieve information on object distance from the sensor in order to avoid any collisions. The design, implementation, analysis, schematics, and code can be found through the rest of this web page.
High Level Design
The modified remote control vehicle we purchased had to have certain functionalities:
1. The user must still be able to “drive” it – after all, you don’t just get into a car and let the car run.
2. The vehicle must never collide with any objects.
3. The vehicle must have its own power to detect “danger” if the driver cannot.
4. The vehicle must take a course of action since the human cannot be trusted.
5. This simulation vehicle must be implemented with a programmable Mega163.
6. The vehicle must stand on its own [i.e. be mobile]. 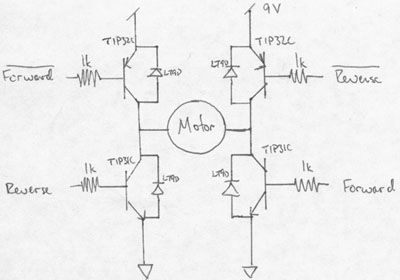 1. Since the user must be able to drive the vehicle normally, the Mega163 must read the original commands of the driver and be able to pass these instructions to the motor system during normal operation. In the design of our vehicle, we merely cut the connections from the reciever in the car to the motor system and used it as an input to our Mega163 [input to port D]. The functions of the car [forwards, backwards, left, right] were controlled through four connections in the original implementation; we “intercepted” these 4 signals and used them as inputs to our PORT D. During normal operation (where objects are further than 4 feet away) the input from PORT D is translated to the output from our PORT B that feeds into the motor system (see part 6).

Is Hawaii prepared for the impacts of climate change?

The Hawaiian Islands represent a wide diversity of ecosystems and environments, including areas of breathtaking natural beauty as well as...