Introduction:
My project is a self-powered solar data logger. Put out in the sunlight, it will measure the light level and log this to memory to be later downloaded to a computer. The system is powered by a small solar panel and battery. 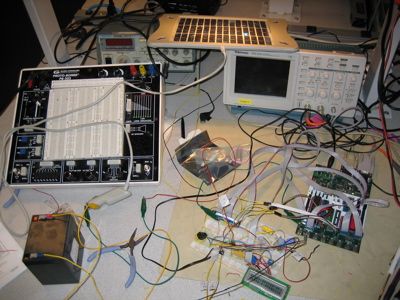 Summary:
The solar logger I built uses a photodiode to measure the solar insolation level. It converts the analog signal from the photodiode to a digital value that is stored in flash memory. Every time the system logs a data point, it also logs the time and date so that the data can be analyzed in the future. The logged data is available for a user to download to a computer for analysis.
While the system is logging, real time data is displayed on a small LCD screen as well as information about the battery voltage, the length of time the system has been logging and the length of time it can continue to log before running out of memory.
The logger has a dedicated solar charging system to provide the needed power. A very simple charge controller regulates charging of a small, sealed gel-cell lead-acid battery by a small solar panel. This charge controller is a simple on-off switch that disconnects the PV panel when the battery voltage rises too high.
The user sets the time and date each time the system is reset as well as the frequency with which data is stored. The user can also clear the memory or continue appending data to the previously logged data and extract logged data to a computer for analysis.
High level design:
Rationale and sources of project idea:
There are many reasons for logging solar insolation data for solar electric systems. When planning to install a solar electric power system, one must be able to predict the power output in order to determine the financial costs and benefits of the installation.
When planning an off-grid solar electric power system, the output must be closely matched with the load so as to provide sufficient power without considerable waste. The power output is directly related to the insolation level. While seasonal and annual average insolation levels for most major cities in the United States are available (http://www.solar4power.com/solar-power-insolation-window.html), cloud cover and other weather effects can be very localized depending upon the topography, making extrapolations from the large cities with established data to neighboring areas unreliable. In addition, this data is not available for every part of the world,
For a large installed solar electric system, one would typically install an insolation monitor to determine if the system is performing as expected. If the system output drops below the level expected given the insolation, an alarm would be set off to indicate that the system needs servicing.
Background math:
Power Needs:
Even without optimizing the system for efficiency, the power needs were very small. The absolute maximum power needs from the various components were 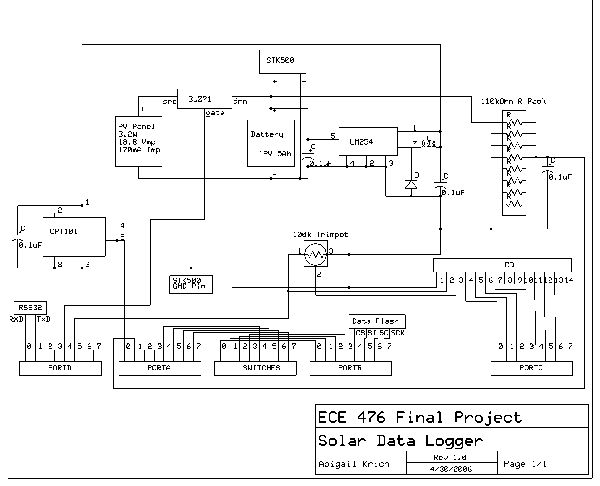 Natural sunlight ranges in intensity from 0 to approximately 1000 Watts per square meter. The photodiode used in this project puts out its maximum voltage at 10 Watts per square meter. With hardly any light striking the sensor, it reached its limit. It was thus necessary to attenuate the intensity of the light striking the photodiode to increase the range over which the sensor could differentiate intensity. Ideally, this would have been done with neutral density filters, but as these were not available, electrical tape was found to be quite effective. Once two layers of electrical tape were placed over the sensor, it gave reliable readings over the full range of expected intensities. The ADC in the microcontroller has a maximum value of 255, this needed to be multiplied by four to roughly convert the ADC reading to Watts per square meter. Ideally, this system would be precisely calibrated and the factor would be more precise than 4, but this approximation gave reasonable results with a range of readings from 0 to 1020 Watts per square meter.

Finding faster-than-light particles by weighing them

In a new paper accepted by the journal Astroparticle Physics, Robert Ehrlich, a recently retired physicist from George Mason University,...