Get ready for the next generation of the classic game Breakout which features a standalone device, interactive user control, and new and improved game modes including two player cooperative and competitive modes.

Breakout is a game of speed, skill, and anticipation.  The player will move a simulated paddle in an attempt to prevent a ball from falling below the screen.  The main goal of the player is to break all the bricks at the top of the screen by deflecting the ball off of the bricks.  Once the ball hits a brick, the brick will disappear and when all the bricks have been broken, the player will advance to the next level. 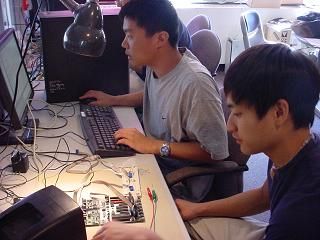 This new Breakout version will allow for two players.  These two players can go head to head in a competitive mode or work together in a cooperative mode.  The players can now have a more interactive playing experience by using accelerometers to control the movement of the paddles.
This project encompasses various skills and pieces of technology we have learned in ECE 476.  These include an NTSC B/W television interface, A/D conversion, and efficient microcontroller programming.  The purpose of designing this game is to provide fun entertainment for people of all ages.  We believe that our innovative hands-on user interface will be beneficial to the public by enhancing hand-eye coordination among all players.
Instructions
The game initially begins in a startup screen shown below.  At this screen, player 1 has the ability to choose between 1 and 2 players.  If 2 players is chosen, the players have the option between three modes of play: competitive mode, cooperative mode, and knockout mode
One Player Mode
READ  RF TRANSCEIVER EXAMPLE WATER GUN PROJECT CIRCUIT TX434 ATMEGA8 RX434

The main goal of the player in this mode is to complete the levels without running out of lives.  This is done by hitting all the “breakable” bricks in the level with the ball (see brick types page).  The ball will bounce off any surface (brick, boundary, or paddle) except for the boundary right under the paddle.  If the ball hits this bottom boundary it will become deactivated.  If all the balls on the screen are deactivated, then the player will lose a life.  The player will start with 9 lives in single player mode.

The main goal of two player cooperative is very similar to single player.  Both players will wok together to clear the levels of all bricks and collect as many points as possible while staying alive.  Game play is identical to single player mode in terms of power ups, bricks, levels, and movement.  In an effort to clarify player position, player 2’s paddle will be slightly above that of player 1.

The main goal of competitive mode is to stay alive.  The two players will have their paddles on opposite sides of the screen (player 1 on bottom and player 2 on top).  There will be a row of random bricks in the middle to act as an obstacle between you and your opponent.  Each player will start with 3 lives.  The players will lose a life if a ball passes their paddle and touches the corresponding boundary behind their paddle.  Once a player loses all their lives, the game is over and the opposing player has won.  In the event that all the bricks are cleared and both players still have lives, the level will start over with a new set of random obstacles in between the players.  There will be no special bricks or power ups in competitive mode.

The main goal of knockout mode is to protect a row of bricks behind your paddle while attempting to break all the bricks of your opponent.  Each player will start out with a set of 15 bricks behind their paddle.  There will be 2 balls on the screen that will be moving around and breaking bricks.  To protect your bricks, you must deflect your opponent’s attempts at breaking your bricks.  In knockout mode, there are no lives.  The only objective is to protect your bricks and destroy all of your opponent’s bricks.  Once a player has lost all of their bricks, the opposing player will win and the game is over.  There will be no special bricks or power ups in knockout mode. 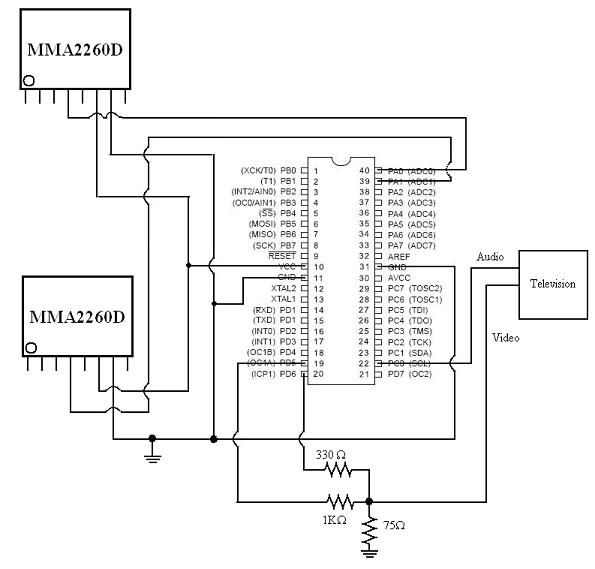 In all modes of play, the player(s) uses the accelerometer to control the movement of the paddle to prevent the ball from falling to the bottom boundary.  The paddle will move to the left if the accelerometer is tilted to the left and similarly for movement to the right.  The paddle’s speed will be determined by the amount of tilt the user applies.  The direction in which the ball bounces off the paddle is determined by the point of contact between the ball and paddle.  This gives the player control over the movement of the ball and allow the player to “steer” the ball in the desired direction.

There are 10 pre-programmed levels that can be played through one player mode and a two player cooperative mode.  These levels sequentially increase in difficulty.  Power ups are available in each level to help the player(s) through the sequence.

We have designed a programmable infrared receiver which can utilize any pulse coded IR signal to play Connect Four from...