Introduction
A spotlight that follows you on its own! 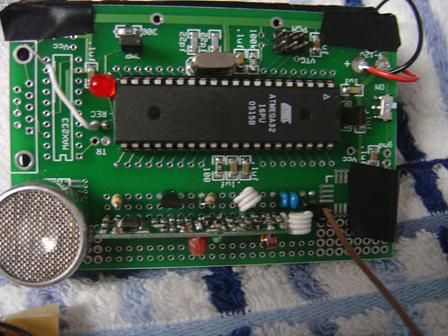 The ultrasonic spotlight tracker is a system that uses a wireless beacon to track a targets location using both RF signals and ultrasound waves.  It then drives a light source to point at the location of the target.
High Level Design
The motivation for an automatic spotlight tracker is to replace expensive manual labor in operating spotlights in theatrical settings.  There are also numerous other applications where knowing the real-time location of a remote target can be useful.
In this project, we limit our remote units degree of freedom to two dimensions to prove the concept, although it can be very easily extended to three dimensions.  To locate the target, we need to measure the distance of the target from at least two known points.  The distances are measured by counting the time it takes for sound to travel from the target to the base station and multiplying it by the speed of sound waves.  The speed of sound in air is about 334 meters per second.  The 16 MHz microcontroller can count time intervals on the order of 0.0625 microseconds, which gives a theoretical accuracy of 0.02 mm.
Once we obtain the two distances from two known points to the target, we can calculate the coordinate of the target point using a technique called trilateration:
Define the target point to be (x3,y3), and given two known points (x1, y1) and (x2, y2), the distance d1 from point 1 to target, and the distance d2 from point 1 to target, we can write down the following two equations:

(4)
We can then use this coordinate to calculate the angle for the spotlight using tan-1(y/x).
To start the timing of the sound wave, we use a RF transmitter/receiver pair to trigger an ultrasonic response from the remote unit.  As soon as we finish transmitting the RF signal, we turn on the timer in the microcontroller to keep track of the traveling time of the sound.  The ultrasonic response triggers an external interrupt on the microcontroller of the base unit to stop the timer and proceed to calculate the distance from the time.
Hardware
The hardware section is divided into two parts V the remote unit and the base unit.

The remote unit consists of a MEGA32 microcontroller on an ECE476 custom PC board from spring 2005 with a RF receiver RCR-433-RP and an ultrasonic transducer (shown below in Figure 1).  It is powered by a 9V battery with a regulator that keep the voltage at Vcc to be +5V.  The RF receiver antenna passes through a low pass filter as suggested in the Radiotronix example circuit notes (see references).  Since the default output of the receiver is +Vcc, we need to first pass the signals through a common emitter amplifier to invert the logic state before sending it to the RX of the UART port (PORTD.0).  The ultrasonic transducer is driven by OC2 (PORTD.7) which toggles between logic high and low during fast-PWM mode when counter 2 is turned on.  It is triggered by the RF signals received, and turned off after a pulse of 50ms. The operating frequency of the transducer is from 23 kHz to 25 kHz, and therefore we drive the transducer with square wave at the center frequency of 24 kHz. 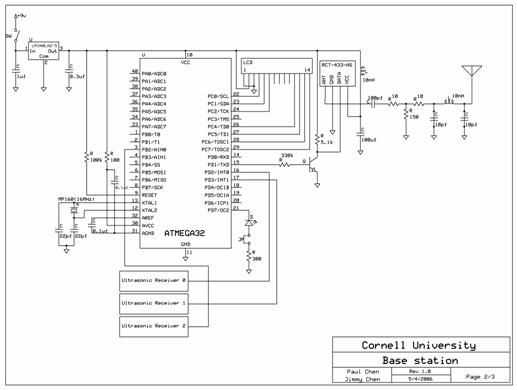 While the system is measuring distances, it will check if any two receivers have obtained distance data.  If so, it will use these two distances and the location of the two receivers to calculate the location of the remote unit using trilateration described in High Level Design section.  If the location is successfully calculated, it will then calculate the angle that the servo motor needs to turn to direct the spot light onto the target.  The angle is then translated to a pulse width duration using the timer compare register OCR2.  Timer 2 is responsible for generating each pulse, and Timer 0 is used to count milliseconds and every 25 ms the microcontroller will as timer 2 to send out a pulse of a particular width to control the servo motor to turn to a particular angle.

Introduction Our project measures the user's skin conductance for monitoring his or her mental state. Summary Medical experiments have shown...