VARISCITE REVEALS AN EXTENDED PORTFOLIO OF NEW I.MX BASED BOARDS

Variscite reveals the portfolio of its new i.MX based products that will be presented next week at the Embedded World 2019 exhibition & conference. Variscite is the only NXP partner who was granted early access to all i.MX 8 programs and will present next week a respectable number of new System-on-Modules based on i.MX 8M Mini, i.MX 8QM and i.MX 8X as well as the i.MX 8M that was released in 2018. 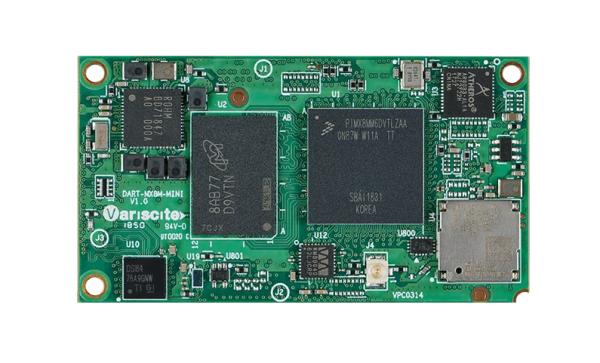 Alongside the i.MX 8 platforms, the company will also showcase the VAR-SOM-6UL, its new member to the ‘VAR-SOM pin2pin family’ based on NXP i.MX 6UltraLite / 6ULL / 6ULZ processors.

The Official Launch Of The DART-MX8M-MINI

The DART-MX8M-MINI System-on-Module (SoM) will be officially launched at the upcoming Embedded World exhibition. The DART-MX8M-MINI is a miniature SoM based on NXP’s i.MX 8M Mini processor with up to 2GHz Quad-core ARM Cortex-A53 plus 400MHz Cortex-M4 real-time processor. The SoM offers integrated HW engines supporting 1080p video encode and decode, 2D and 3D graphics, HQ audio and a wide range of connectivity options such as Wi-Fi/BT, Ethernet, and USB.

The company is expanding its ‘VAR-SOM Pin2Pin product Family’ with several new products which will be presented at the Embedded World exhibition: The VAR-SOM-MX8, VAR-SOM-MX8X and VAR-SOM-6UL. The Pin2Pin family offers Variscite’s customers a high level of scalability, extended lifetime availability and reduced development time, cost and risk.