Background of the project.

Several months ago I tried to connect a microcontroller system to a VGA monitor to output data in the form of text. I was surprised to find little on this subject on the internet, to assist me in achieving this goal. Certainly nothing simple a beginner could find useful.

There are examples out there that utilise standards such as PC-104 or complex FGPA implementations found at www.opencores.org. Other solutions include graphic controllers from Fujitsu or even one local Russian person who was offering for sale a project for $5000 on ACEX. These are fine but are little help to most hobbyists etc out there who wish to display text on a VGA or similar screen. 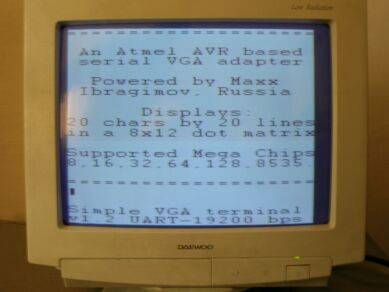 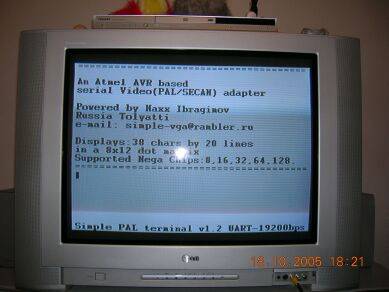 What I desired was a “quick and dirty” solution that did not cost too much.

Initial calculations showed that the the AVR 8-bit microcontroller from ATMEL, with its 16Mhz clock speed providing approximately 16 MIPS was a good candidate for further research. Also note that newer AVRs such as the Mega48, Mega88 and Mega168 will officially support clock rates upto 20 Mhz.  Therefore I concluded that with a clock of 16 Mhz I could achieve something in the order of 8 Mhz speed of data being transferred out of a port.  I also chose the AVR as I had already built up quite a body of experience with it and so I began work of the project.
After approximately two to three months of research, I present you the fruits of my labour!

The goal of the project:

The problem which I have set myself is simple enough to enumerate.  With commonly available microcontrollers like the Mega8, Mega16 and similar, and with a minimum of external components I wanted a design that would be capable of displaying at least 15×15 characters on a VGA monitor using standard VGA frequencies.  The data itself is to be received by the microcontroller via its USART port.  All using a 16 Mhz clock for the AVR.

The given problem at present is solved successfully.
Moreover – the project is a little bit expanded and added by introduction of formation usual
Video monochrome (PAL/SECAM) a signal. I.e. depending on position of a jumper type of formed video of signal VGA or Composite Video.

The initial goal has been achieved.  The project has expanded to include Monochomatic Video singal (PAL/SECAM). In my test set up a mere jumper determines whether the output is VGA or Composite Video.

This circuit based on ATtiny26 but it could be anyone microcontroller of AVR family.  Produce stable one MIDI tone and...