BUT FIRST AN IMPORTANT NOTE:
This project uses lethal voltages.  If you are not experienced in working with lethal voltages, read this project, but don’t build it. You only have one life, and AC power can take it from you very quickly, or leave you with terrible injuries.
When working on high voltages, remember:
• Keep one hand in you back pocket. Don’t provide a path through your heart.
• Use and insulated mat or proper insulated footwear (bare feet on a tile or concrete floor doesn’t make it.)
• Make sure your equipment is in good repair and is properly grounded.
• Never assume a conductor is safe to touch.
• Don’t work when alone.
• When working with AC line voltages, use a ground fault interrupter.
• Never work on high voltages while under the influence of alcohol or drugs.
Do not build this project if you are not experienced in working with lethal voltages.
One more warning: Failure to use the fuse and AC line rated capacitors used in this project can result in personal injury, death, and the destruction of property. Be sure you know the parts you are using and the role they play in the safety of the circuit’s operation. Any use of this information is at the user’s discretion and risk; in no case will Richard Cappels be responsible for any injury, death, or loss resulting from the reliance of any information provided on this website. If you aren’t competent to work on a particular project, don’t.
Introduction
I made a pair of LED night lights while living in an apartment in Bangkok several years ago. I am not blaming the electrical service in my building, but of the two years that I lived there, I went though several florescent night lights. Finally, I got tired of replacing the lights every few months and decided that since I had a lot of white LED, they could be put to good use. The result was a pair of LED night lights that have served me well for over six years as of this writing. 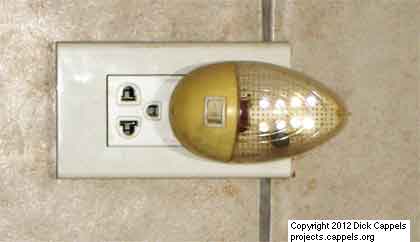 Each light used LEDs from a different source. The LEDs from Nichea stayed the brightest and whitest while the bargain-basement LEDs from a source in Hong Kong tended to drift toward pink and yellowis tints over time. That’s 50,000 hours, and the lights are still perfectly serviceable, but you can tell from the photo at the top of this page that the plastics have changed color and look their age. Fifty thousand hours and still going strong is testamony to how long conservatively driven LEDs can last, especially given that the Nichea LEDs were manufactured last century -way back in 1999, the early days of modern white LEDs.
There are two strings of LEDs, one conducts on each of the half cycles of the AC power line. It is important to place LEDs operating from opposite half cycles next to each other so as to not have noticeable flicker.

Photo. This is the test circuit -the basic driver is only two transistors, two resistors, the circuit was evaluated using...