The game consists of two levels. In each level, a LCD TV screen displays the 2-D top view of the a parking lot, and the player needs to park the car into the proper parking spot by operating on a fake steering wheel, gas/brake pedals and gear stick.
On the hardware side, for user control interface, we have built the fake steering wheel, gas/brake pedals, gear stick with basic wood board, hinges, springs, screws, switches, accelerometers, potentiometers, etc. For other parts (display and computation) in the system, we have used the LCD TV screen and Mega 1284 microcontroller which are supplied by lab. These are essential hardware equipment for this project. 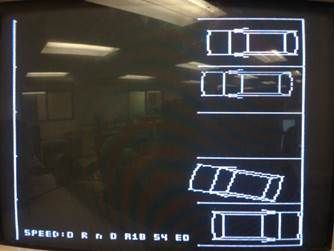 On the software side, we have coded the drivers for steering wheel with accelerometer readings, the brake and gas level with potentiometer readings, the gear stick with switch readings. Also, we have applied the mathematic calculations and matrix conversion for car coordinate computation algorithm.

(1) Rationale and sources of your project idea
According to statistics, in 2012, 13% of national wide car accident claims occurred in parking lot. Some of the common causes are parking lot congestion, blind spot when backing out, too much focus on finding a spot, etc. The idea behind this project, besides enjoy the video game itself, is to aid people developing parking skills. Also, the video game provides a 2D view of a parking lot so that it gains players an alternative sense of driving as well as understanding for vehicle motions.
The rationale of this project is to build a fake user control interface, sense the user’s driving intention through sensor data acquisition and analysis in microcontroller and output the results in the LCD monitor.
(2) Logical structure and background math
The logical structure of this project can be divided into three parts: hardware building, sensor data analysis and video game processing.
The hardware building constructs a user control interface and places the sensors in the hardware accordingly. It establishes hardware for the user-machine communication system which includes a steering wheel, gas and brake pedals, and a gear stick. The faking control devices built are simple yet good enough to provide players a realistic feeling of maneuvering inside a vehicle. (Please see the section ‘Program/Hardware design’ below for more details on control interface.)
The sensor data analysis is low level software suite (driver code) development which uses the mega1284 microcontroller and translates the readings from the sensors (built on the hardware devices) into car status indicators. This will be further used in later video game development. (Please see the section ‘Program/Hardware design’ below for more details.)
The video game processing involves many background mathematic calculations such car coordinate computation, car rotation matrix constructions, etc. It also includes video signal processing, such as line plot, character printing and so on. (Please also see the section below ‘Program/Hardware design’ for more details.)
Car Coordinate Computation
The program uses the function ‘video_car’ to compute coordinates of a car and plot it onto the LCD display. The ‘car’ is constructed using 22 points based on the head two points (point 0 and point 1) given. Below is diagram and coordinate mapping of the car.
The program uses matrices to compute the head points (points 0 and 1 above) of the car during its movement. Below is a diagram and pseudo-code for coordinate computation. The matrices store the coordinates increments of both x and y direction depending on the current car head direction (head state). And different matrices are used for different car trace circles. (When the turning angle of the steering wheel is large, the car will move in smaller circles compared to the case when the angle is small, the car will move in large circles.) Thus, the next state of coordinates of the car depends on its current coordinates, its moving direction (forward or backward), its current head state and the steering wheel turning angle.
(3) Hardware/software tradeoffs
The hardware and software tradeoff in this project mainly involves the complexity and capability tradeoff. First of all, in the hardware side, the capability of the mega1284 microcontroller is limited in terms of memory capacity and processing speed. For example, in this project, the computation time for the car coordinate and rotation is limited by the video frame refreshing speed (most of the microcontroller’s CPU are consumed by refreshing the video output to the LCD monitor). Thus, the sensor reading resolution is limited. The more complex the hardware, the more sensors would be required and more sensor readings as well as processing time from the microcontroller would be needed. Too complex in the hardware design would result in microcontroller incapable of refreshing he LCD display in time, that is, refreshing rate on LCD. Therefore, there is a tradeoff between complexity and capability in the hardware. Similarly, in the software side, the more complexity in car coordination computation, the more time would be required in the microcontroller processing. For example, if we continuously compute the car coordinates in rotation movement, lots of processing time would be needed for trigonometry. Thus, instead, we chose to discretely pre-compute rotation coordinates in a matrix which saves us processing time at the price of slightly discontinuous movement in the car rotation.
(4) Relationship to available IEEE, ISO, ANSI, DIN, and other standards.
This project will be following IEEE. The connection between the MCU and TV display will use the US standard RS- 170A (NTSC) . And the data transmission between sensors and MCU will follow the SPI standard.
(5) Patents, copyrights, and trademarks
The video output plots are referenced from previous projects of
// Mega644 version by Shane Pryor
// mod by [email protected]‘

(1) Program details.
The program for this video game consists of two parts: low-level driver code and high-level video game design. (The details are described in the table below.)
One tricky part in the program is the design of an auto-adjust system on car current direction variable ‘angle_state’. The ‘angle_state’ variable is used to indicate the car heading direction. This variable is estimated through the use of matrices during car turning movement. Thus, the error of inaccuracy is inevitable and error gets accumulated over time. To solve the problem, we code an auto adjust function ‘adjust_angle_state’ to adjust the ‘angle_state’ variable according to the coordinate of the car. However, this function is slow in computation and if called on every cycle of LCD frame update, it will slow down the LCD refresh rate. Therefore, we chose to only update it when the car is not moving (when user steps on the brake pedal). In this way, the ‘adjust_angle_state’ function acts as a feedback system that synchronizes the coordinates of the car with the ‘angle_state’, yet its slow computation does not get in the way of refreshing LCD display. 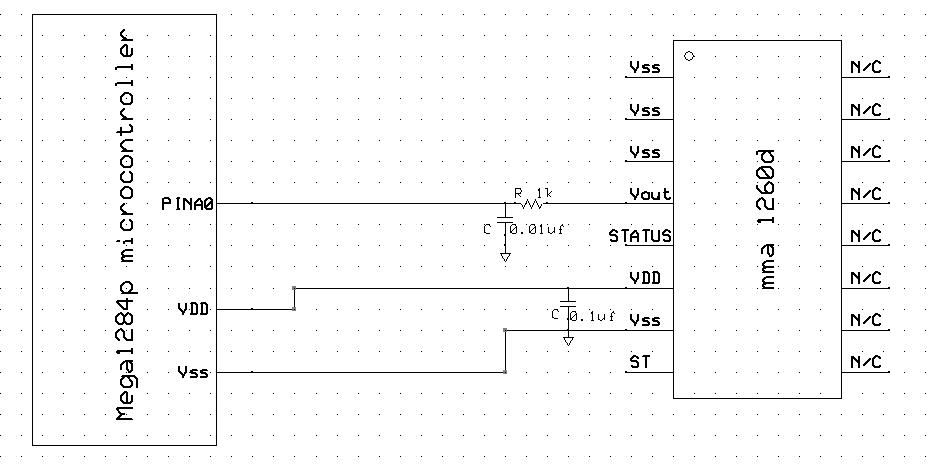 The low- level driver functions use the ADC in the microcontroller to read the sensor readings and return the value as the status indication of the vehicle driven by the player. This includes the following functions:
Driver functions:

(2) Hardware details.
The hardware design in this project is not so difficult. The basic hardware design strategy is to use accelerometers to measure the steering wheel angle, and use potentiometers to detect the brake and gas pedal, and in addition, we use a switch to act as a gear stick. The tricky thing in the project is how to connect the user interfaces with the sensors, so that the sensors can generate useful control signals to the microcontroller.

It's a rare thing when a tropical depression develops the same exact distance between two landforms, and newborn Tropical Depression...