An ATtiny12 controller as a timer and some switching circuitry turns the doorbell off for 10 hours at the same time each day.

The string of resistors across the top of the board are series connected to make a 728 Ohm 2 watt resistor. The slide switch is used to switch the circuit between the test and operate modes and the large round component to the left of the switch is the 0.033 farad capacitor. 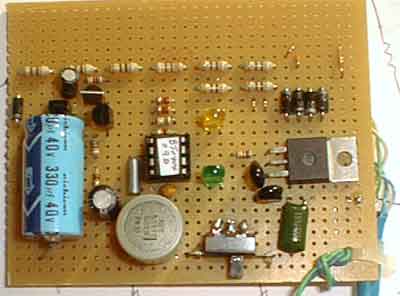 Download
The assembly language source file is on this page.

Overview
This is a resettable timer and the to circuitry connect it to an 18V to 24V doorbell circuit.

My home is in a nice neighborhood. The front yards are well kept, it is quiet, and people wave when you go down the street. The park nearby is kept clean and green and children there play nicely with each other. Behind this idillic appearance the neighborhood harbors a dark side. Door-to-door solicitors, who ring the doorbell several times a week selling everything from insurance to religion. This isn’t a real big problem for me, but because of my wife’s schedule, she frequently sleeps until late in the morning. After being startled awake by a doorbell, she can’t go back to sleep and suffers because of it the rest of the day. Our first solution was a politely worded note on the door asking people to kindly go away, but that didn’t work at all.  Disconnecting the door bell wire at the transformer helped some, but that meant that we didn’t know when someone we wanted to see was at the door, or when the UPS delivery person dropped something off, leaving switching the bell circuit on and off as the only practical solution.
Mounting a toggle switch on the doorbell would be a simple enough solution, but with the availability of suitable microcontrollers, why not automate the switching? That would eliminate the problems associated with forgetting to switch the bell off before going to bed or back on after waking up.
After a couple of days of turning the problem over in my mind, I decided to modify the ATtiny12 real time clock-calendar firmware I had written previously, to make a resettable timer that would switch the doorbell off on a 24 hour cycle. The device described here does just that. The circuit connects to the doorbell circuit – taking power from the 18 VAC from the doorbell transformer and switching power to the doorbell circuit most of the day. The user interface is a pushbutton, a toggle switch, and two LEDs. One LED – the green one -blinks at 1 Hz, just to give me some comfort that the circuit is working. The amber LED glows whenever the doorbell is disabled.
To set the timer, you just push the button momentarily, and when its released, the amber LED will come on and the doorbell circuit is disabled  (the door bell button doesn’t work) for a 10 hour period. At the end of the 10 hour period, the amber LED goes off and the doorbell is enabled. 24 Hours after the button was last pushed, the amber LED comes back on and the door chime circuit is disabled again. this cycle repeats every 24 hours, and because its timing is set by a crystal oscillator, it should be able to go for months or years without needing to be reset.
The toggle switch allows the timer to be bypassed in case we want to have the doorbell operating 24 hours a day or in the unlikely event of a circuit failure.
Simple as it is, I have to say that this is one of the more useful projects for the home that I’ve built.
The Circuit