Its built into a plastic project box with an aluminum cover (on the bottom). The controls are as follows: Large golden knob is coarse tuning, small black knob with a blue index stripe is fine tuning, the green LED is the power on indicator, the slide switch is the on/off switch. The small black knob with the orange index stripe is the band select knob. The two RCA connectors with red insulators are the sine wave outputs. The RCA connector on the right side of the box is the frequency meter output. The cord carrying the 12VDC input power exits the box to the right. There are no scale markings or band markings, since the oscillator is intended to be used with a frequency meter. Turning a pot or switch clockwise increases the frequency. 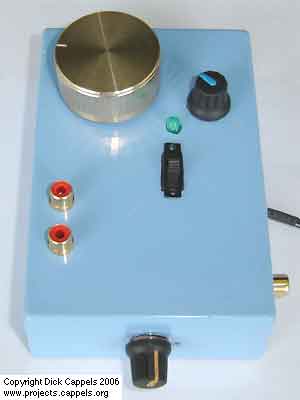 The time came, when I needed a simple test oscillator that covers a wide range of frequencies. My main interest at the time is the 100 MHz to 300 MHz region, but since it wasn’t much trouble to extend the coverage to under 20 MHz, I did so.
The Circuit
The circuit is a modified Colpitts oscillator, tuned with MV209 varactor diodes. The resonating inductor and the drain choke are selected by a rotary switch.  1N5711 Schottky diode, D, clamps the maximum positive voltage on the gate of oscillator FET, Q1 to just above ground to reduce the distortion in the wave form on the gate of Q1. Buffer Q2 provides about 1.8 volts peak-to-peak at 20 MHz to drive a frequency meter.

READ  Photocell Amplifier using microcontroller
Since the P-P voltage on the gate of Q1 is too large to be buffered by a 2N5485 without sever distortion -see the pictures further down this page), the signal is reduced by a capactitive voltage divider formed by 1 picofarad capacitor C11 and the input capacitance of Q3. This results in about 650 millivolts on the gate of Q3, and about the same on the source.
To make a 50 Ohm output, so the generator can drive a 50 Ohm cable, I measured the output impedance of Q3 while using a 220 Ohm source resistor.  This was done by measuring the Peak-to-peak output voltage without a substantial load, at 20 MHz, then loading the source with an additional 470 Ohm resistor, and calculating the effective output resistance of the source follower based on the change in amplitude. This value was found to be about 139 Ohms. This is much simpler and more direct than trying to calculate the output impedance as a function of data sheet values, since the key parameters such as IDon vary too widely to allow design without trimming. The output impedance is about 50 Ohms at 20 MHz, but this design approach does not separate out the resistive from the reactive part of the impedance, and I expect the impedance to change as a function of frequency.
Using a program that seeks numerical solutions to formulae, I found the values of resistors for R11 and R12 that simultaneously satisfy the requirement that the total resistance be equal to 220 Ohms and the resistance from the the connection between R11 and R12 to ground, including the effects of the source follower, is equal to 50 Ohms. The values, R11 = 150 Ohms and R12 = 68 Ohms are the closest 5% resistor values.
The +24 volt power supply was made separately, and is described separately on this site. You can find it with this link:  5 Volt to 24 Volt DC to DC Converter.
Construction

The oscillator subassembly was built, dead bug style, or “Ugly Bug” style as a friend calls it, on a piece of copper clad fiberglass board, that was in turn mounted to the bottom of a two section six pole rotary switch. The board is held to the switch with solder on the two solder tabs on the switch.
Construction started by drilling holes in the copper to correspond to the connections on the dual 6 pole rotary switch. The oscillator was built dead bug style. Solder on the solder tabs for on the switch can be seen at the 5 o’clock and 11 o’clock positions. 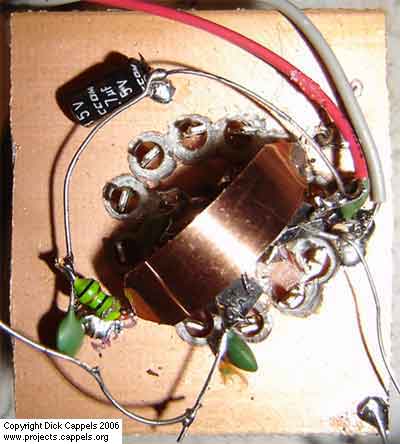 READ  The Game of Life using ATtiny2313 microcontroller
The resonating inductor for the 190 to 310 MHz band was made with a strip of copper sheet. This copper strap, along with the switch contacts, was not low enough inductance to get the oscillator above 300 MHz, so a piece of #22 wire was placed in parallel with it. Notice the ring of wire supported by capacitors. This is the +5 volt rail. All of the drain inductors were soldered to the +5 volt rain and to their respective contacts on the switch.
For more detail: HF/VHF/UHF TEST OSCILLATOR using microcontroller
Tags: interfacingledMicrocontrollertest oscillator

I needed a way to measure hand-wound RF inductors in my second lab, and since I would only be doing...