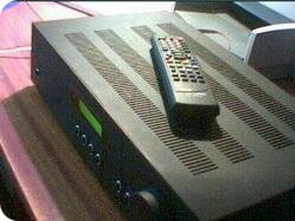 AT90S8535, TDA7318 and LM3886 have been realized with digital amp system LED Indicator-signal input selection can be made, unfortunately explanations could not solve in a language 🙂 but ATMEL microcontroller dealing with people a good source AT90S8535 source for. Bas code all schematic documents have a project 4 found out occurs cpu preanf border amp and power are no longer the classic LM3886 integrated Amplifier Used in the appropriate price of an integrated high-quality, easy to install 🙂

The amplifier is controlled completely digitally . Used items are of high quality such as metal resistors in the audio , WIMA film capacitors … The power stage is the LM3886 systems . These are some of the best integrated amplifiers . The structure is typical of the system . The amplifier should reach about 50W per channel 🙂 8 Ohm load .

The amplifier is powered from a power supply built toroidal transformer ( 150W ) and capacitors with a total capacity of 40 000uF . Next to it is a smaller power supply from the power of the digital preamp and tuner. The preamplifier circuit is based on the TDA7318 . This system also has a very good audio quality ( low distortion , noise , high dynamic ) . It has an internal control and input selector is through the I2C bus ! Control includes strengthening and sound.

The tuner is built in this module PHILIPS OM5610 . It is a complete digitally tuned tuner . It does not require any adjustment and is about the size of a matchbox ! The only drawback is its relatively high price , but thanks to him, tuner design has become very simple.

All these management ATMEL microcontroller . AT90S8535 processor belongs to the family of AVR . It has 8kB Flash memory , 512 bytes of EEPROM , 512 bytes SRAM , hardware PWM Real Time Clock and many more … And most importantly can be programmed in the system through ISP connector . Control is via keyboard and recycling .

All important information is displayed on the LCD alphanumeric display (16 * 1) . The amplifier is of course as a remote control RC- 5 (MAK 2002 Maxi ) .

The driver is written in BASCOM – AVR . This is an excellent compiler , which allows even less experienced developers to quickly write a very impressive program!

This language has a number of commands for the use of the many features AVR . It is ready handler : I2C , RC -5 , 1WIRE , LCD, RTC , SPI, WDT , PWM and more … Unfortunately, the use of this compiler associated with a substantial increase in the volume of the generated code. For this reason, the program has only basic functions such as the tuner has not been added RDS -u . But there is nothing in the way to add it to the system such as SAA 6588 ( controlled by I2C ) .

The amplifier has 3 inputs + tuner inside 😉 input for CD is initially slightly suppressed. The other zones do not have silencers . The signal from the tuner is amplified by 12.5 dB in the internal TDA7318 amplifier . Each input has a separate adjustable gain, bass and treble .

The receiver is a 9 channel memory cells . Step synthesis tuning station is 12kHz , and adjustment range is between 87.5 – 108MHz .