Ni-MH Battery Charger circuit 4 AA batteries can be charged in the circuit is more complex, but in general attiny26 microcontroller circuits BD140 transistors and a few passive components consist of batteries connected to the channels via LEDs showing status. Attiny26 operated 8MHz internal oscillator used for additional crystal oscillator fuse settings do not need to be connected, are the source c hex code. 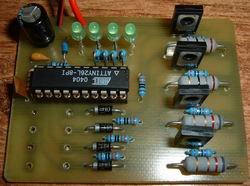 The charger is designed to charge secondary 1 to 4 cells. Each cell / accumulator is charged separately (not associated), and each has its own termination algorithm after full charge. The full charge detection is performed by evaluating the charging characteristic, especially its downward part, where the cell shows a negative difference -dV.

The method of evaluating the charging cycle -dV is based on the measurement and evaluation of the voltage drop on the cell after reaching the full charge – the peak of the Vmax characteristic. If we want the battery to be charged at this voltage value (disable charging after reaching this peak), it should first be determined and we would also get the charger for just one particular battery. In addition, the maximum may change for example with time, temperature, age … For universal use, it is better to discontinue charging after the -dV (or other full charge detection method based on charging characteristics). This way, you can charge any current capacity – will be relatively the same as the charging current will radically vary.

The -dV method is to turn off charging “tightly” after its full charge. This way, the cell can be charged from any state (for example, 50% discharge) and it is not necessary to discharge it completely in advance. Here is the point to refute the dogma of a “memory effect”! Such a phenomenon exists, however, it does not have such disastrous consequences as it is attributed to it, and in ordinary practice it can be neglected, as its influence is very small. In addition, one complete discharge and charging cycle can be removed. Therefore, it can not be said that the memory effect has shortened our lifetime or reduced capacity. Capacity or lifetime limitations can be achieved by poor charging, which eliminates this charger (incorrect charging occurs on chargers with an end-of-life time when the battery with a current capacity is not used or not fully discharged – typically a timer charger) or misuse, mainly excessive discharge or deep discharge.

Very similar charging characteristics also have NiCd secondary cells , the difference is in their steeper drop after reaching the maximum voltage (-dV / dt), so they can also be charged with this charger. It can even be said to charge better than NiMH with this charger. However, the design I designed / developed and tuned only for NiMH.

I created the particular circuit solution with MCU Atmel ATLiny26L-8PI, which contains enough I / O lines for memory, memory capacity and especially 10 bit AD converter with 11x multiplex and internal reference 2.56V. All measurement accuracy is dependent on this internal voltage, but we only require accuracy at -dV.The MCU works with an 8MHz internal RC clock.