Here is some experimental hardware and software to transmit and receive AX.25 packets.
It is essentially a PIC-E clone designed around a Atmel AT90S2313 with a few extra bells and whistles.
I had picked up a couple of MXCOM MX-614s at the TAPR display (I also joined TAPR) at the Dayton Hamvention, and I needed a project to try them out on. I had designed many projects around Microchips PIC series micros, but had recently started experimenting with Atmel AVR micros. On the pic mail list this is referred to as ‘going over to the dark side’. AVRs are  PIC like risc processors, but with some additional features that made them slightly more suited for certain projects. AVRs are also very cost competitive against midrange PIC parts. Simple flash based in circuit programming and cheap development tools also contribute the the attractiveness of the AVR processors. AVRs also code very well in C, but I’m still stuck with slugging away with assembler. 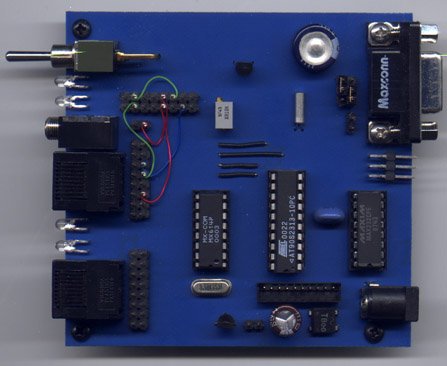 Most of the AVR devices are available now from Digi-Key or other online sources. Digi-Key also stocks the STK-500 starter kit which is a great way to start working with Atmels for a very reasonable price.

Introduction:  This is the hardware and source code for an Atmel ATmega48 based four digit Nixie Tube Clock. Description: This...