This is a low frequency amplifier with an adjustable transimpedance that is
intended to be used to take relative measurements of a wide range of photo currents. 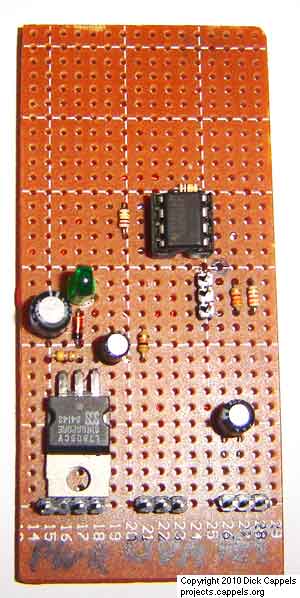 Not having many parts, this amplifier can be put together in a short amount of time.

Find updates at www.projects.cappels.org
Introduction
I needed to make some relative optical measurements. I had some small but relatively large area photo diodes, that when operated as photovoltaic cells generated between 20 nanoamps and 200 microamps with the range of optical power available from a light source I needed to test.  That is why this amplifier came into being.
The output of the amplifier is to be measured on a digital voltmeter. Besides being able to accept 20 na to 200 micro amps and output voltages that range form 100 mv to 2 or 3 volts, the amplifier needed to have a low input resistance so the diode could be run at or near zero bias so that its output would be a linear function of light on the photocell. It also has to have plenty of connectors. Along the bottom of the board in the image above, from left to right, are a power input connector because it would use an isolated unregulated DC power supply that is sometimes used for other things, a voltage output connector so that its output could be plugged into a digital voltmeter, and an input connector so that it can accept current from a variety of photodiodes.
The objective of the design was an amplifier that could be built quickly and use “ordinary” parts, except for the op amp, which needed to have low input offset current and a decently low input offset voltage. I also did not want to worry about low noise design, hence the 22 uf capacitor on the input and the use of a digital voltmeter to read the output.

Measure current vs voltage or voltage vs current over limited range with good accuracy   This was built on a...