A pixel artist friend of mine wanted a mouse to try his skills on a real C64. I thought I could help him by making an adapter that would allow a regular PS/2 mouse to be used with a Commodore 64. The most popular and supported C64 mouse is 1351 mouse which uses analog capabilities of joystick control ports to send movement data. Same mouse also has a joystick compatibility mode that emulates joystick tilt in response to mouse movements. A PS/2 mouse uses a serial protocol to send digital packets that contain information about current counter values and status of the buttons. A 1351 mouse sends information in the form that C64 analog inputs can read. [M]ouse, the coupling device, communicates with a PS/2 mouse on one side and presents itself as a 1351 mouse to the other side.
This work is based on the pioneering design by Levente Hársfalvi, Serial mouse interface for Commodore. Although the element base and interfaces supported in his project are different, his brilliant work served as inspiration and basis for the development of [M]ouse.

Hardware consists of ATmega8 microcontroller, filtering caps, several resistors and connectors. The schematic is basically an adaptation of Levente’s design to a more modern microcontroller and PS/2 interface. Everything is assembled on a small homemade PCB. Programming pins were only used for fuse bits setting and flashing the bootloader. All firmware programming was done via the serial interface through two temporarily tapped wires. 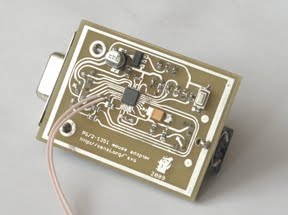 The circuit contains an additional 5V regulator because I was worried about implied 50mA power draw limitation on the C64 control port. In reality, this limitation is purely hypothetical and the mice that I tried never sucked too much power anyway so this regulator is not needed.
ATmega8 is clocked by its internal 8MHz RC oscillator. It is expected that the device will be used in room conditions with more or less stable temperature and frequency stability is not going to be an issue. To minimize error rate with a 8MHz oscillator, 19200bps serial speed is chosen for bootloading and debugging.

PS/2 protocol and common mouse negotiation procedures are best described by Adam Chapweske in The PS/2 Mouse/Keyboard Protocol paper. Electrically PS/2 interface needs open-drain lines with pull-ups. ATmega8 doesn’t have open drain outputs (except for TWL pins which can’t be used for PS/2 interfacing). In this project open-drain pins are simulated by dynamically switching between active low and hi-impedance states. The implementation supports two-way communication with a PS/2 device and is interrupt-driven by PS/2 clock on INT0 and by Timer0. Read operations are nonblocking; write operations await completion. The PS/2 software module can be used to interface to any PS/2 device be it a mouse or a keyboard.
Higher-level mouse functions are supported only as much as required to properly boot and configure a regular 3-button mouse.

1351 Mouse is said to have analog interface, which is however not entirely true. It’s based on a premise that C64 analog-to-digital converter in fact measures the time it takes to charge a capacitor (supposedly, through a potentiometer in an analog paddle). By detecting the moment of the beginning of a measure cycle, it is possible to quickly charge the capacitor to its maximum value at any given time. How to interpret the measured time is entirely up to C64 software. 1351 mousing software interprets such changes in time as mouse movement.
Here’s an illustration from the original U.S. patent 4,886,941 best describing the workings of the 1351: 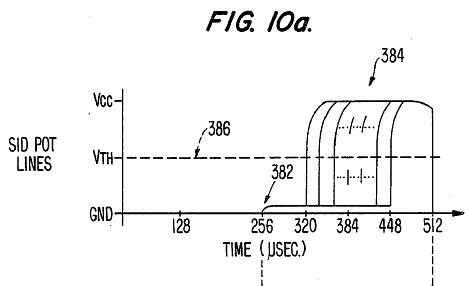 A measurement cycle takes not less than 512 microseconds. First 256 microseconds are spent by SID making sure that the capacitor is discharged. The following 256 microseconds are spent waiting until the capacitor charges to the threshold value Vth. The time when Vth is reached is marked and is used by C64 software as analog input data. Instead of using a large ohmic potentiometer, a 1351 mouse rapidly charges the capacitor at intervals between 320 to 448 microseconds from the beginning of measurement cycle. If this is a POTX line and a mouse is being moved right, the interval from 0μs to the moment of 0-to-1 transition  will keep increasing until it reaches 448μs, then it will jump back to 320μs and so on. If a mouse is being moved left, the interval will decrease until it hits 320μs and then it will jump to 448μs. The faster the movement, the faster the change. Similar readings could be obtained from a potentiometer without angular limits: the resistance would go up and then hop back to minimum after 360 degrees. In pure terms it can be said that transition delay is zero_point plus (axis_counter_value modulo 128) microseconds. That’s all there is to the magic 1351 mouse.
For more detail: PS/2 to C64 Mouse Adapter using ATmega8 microcontroller