About a week ago, in preparing to run some errands, I plugged my iPhone 4S into the charger in my car so that I could stream Pandora while I drove. Oddly, a “this accessory may not be supported” message appeared on-screen; when I unplugged and re-plugged the iPhone to the charger, it didn’t reappear, so I didn’t think anything more of it … until a half hour later, when the iPhone again alerted me, this time with a “low battery” message. For some reason, attempting to charge the battery was instead rapidly drainingit; unplugging the phone from the charger restored the normal discharge-via-use rate. But by that point, the “damage had been done;” none of the chargers I tried would restore normal operation, and the battery was soon completely drained. 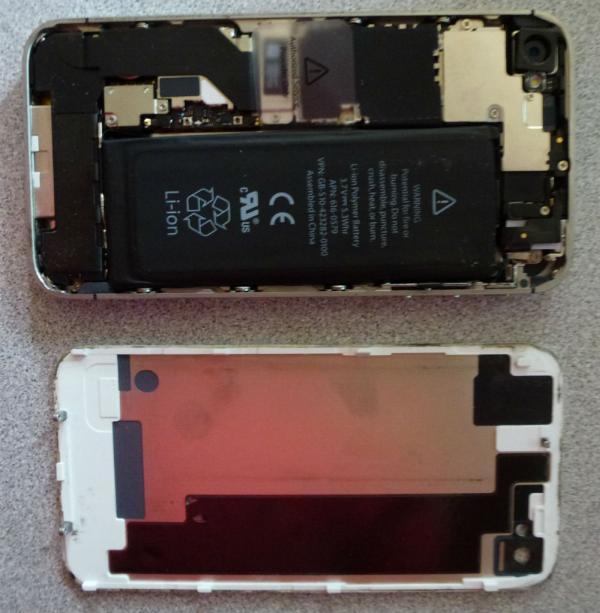 This was my work (Verizon carrier, versus personal AT&T carrier) phone, and it was a Friday, so instead of switching to a different handset right away I ordered a replacement battery (complete with toolset) for $20 from Amazon with free Prime two-day shipping. It arrived mid-day the following Monday, and I set to work on the swap right away. Bafflingly, the battery-plus-tools didn’t come with any installation instructions; fortunately, iFixit came through once again. I recommend that you supplement this writeup with a perusal of their battery-replacement guide, which also includes additional images.
I’ll begin with a couple of views of the patient:

When I opened up the product box, here’s what tumbled out (again, note the lack of an instruction sheet):

The included “pentalobe” and Philips screwdrivers were surprisingly well-made. I also ended up using the plastic tool; I never figured out what the other two metal-constructed tools were for (did I mention that the vendor neglected to include any instructions?).

READ  Maintenance-free lead batteries Panasonic will surprise by their lifetime

The emerging trend of smart lighting and Internet of Things, requires a new generation of LED drivers. InfineonTechnologies AG introduces the new...