The self adjusting window shade will automatically raise, lower, open, and close your blinds by itself. A computer terminal acts as a remote to broadcast instructions to the window shade via RF. These manual adjustments are stored into the microcontrollers system along with the rooms current ambient light and temperature settings. When these lighting and temperature conditions are found in the room, the window shade will automatically readjust itself to that previous level. 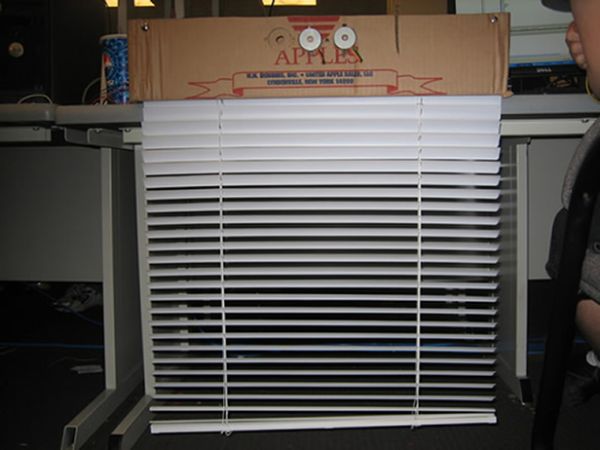 We got based our design off Lutrons Sivoia shading solutions (youtube video found here). The Lutron system features that we were especially interested in were the remote functionality, and the automatic capabilities of the shade. We noticed that it might also be favorable to create a memory system within the window shade that would allow it to remember the users previous settings and automatically adjust based off the current conditions in the environment. In addition we created a radio frequency unit that connected the window shade to a computer system that would be able to not only manually adjust the window shade settings, but potentially control entire systems within the home.

Our design contains two ATMEL Mega644 Microcontrollers: one to control the computer interface and the other to operate the window shade. The first ATmega644 connects to the computer terminal. Hyperterm allows the user to input commands to the MCU to send and/or receive data. They are then transmitted through the RCT433 to the receiver on the other MCU. 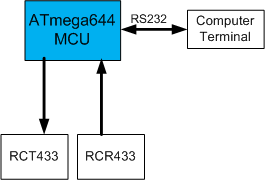 The second MCU contains two modes of operation: automatic and manual. During manual mode the MCU receives the data transmitted from the first MCU and processes instructions, moving the shade to the desired position. When it is not receiving instructions, the MCU switches to automatic mode, where it adjusts the blinds to the users previous settings depending on the lighting and temperature conditions in the room. The MCU then sends a signal out to the motors to rotate them the correct amount to adjust the shade.

The detailed schematics of these designs can be found in the Appendix.

The motor can be driven with half-step or full-step configurations. Half-step was preferred because it provided more driving power. Unfortunately, this increased power consumption. Since power consumption isn’t a metric for this project, this was an acceptable solution for increasing the strength of the weak stepper motors.
The resolution of the position of the blinds and flaps must be balanced with memory size. The position is stored for a certain configuration in a table. The position is sized to be a byte, allowing 256 possible positions. If the position had been sized as an int, allowing 65536 positions, the memory needed to map configurations to possible positions would grow by about 256 times the length of the table. The length of the table that stores possible configuration options is determined by the degree of tuning required for setting automatic points. For finer responses to conditions, more entries would be required. While the current configuration does not fully utilize data space, it provides adequate response to conditions as well.
When discussing methods to implement a second UART, the solution of a secondary hardware UART on the ATMega644P was overlooked. While a hardware solution is more favorable, due to simplicity of implementation, a software UART allowed finer control over the transmission rate. In order to mitigate risks of malfunction of the RF transmitter/receiver pair due to running the baud rate close to its specification, a lower baud rate may be selected. Due to the nature of the timers, this baud rate does not need to be quantized by the resolution of the hardware USART control registers (i.e. not limited to the micro controllers limited selection of baud rates). Half-duplex communication was also desired due to the shared bus property of the RF channel and the lack of any frequency multiplexing.
Due to the interactions between various interrupts, especially the critical areas of sending/receiving data over the RF link, the timing of the motor update interrupt and the software UART interrupts must be long enough to avoid loss of data. For example, the software UART sampling rate must be long enough for the delay of a motor interrupt to complete processing, hence sampling bits consistently at the correct time. This assertion would limit the baud rate, but since the baud rate is already limited by the RF modules, this factor can be safely ignored.
The controllability of the window shade presented a usability trade off. While the user should be given the freedom to enter any arbitrary adjustment value, overestimating adjustment values would cause the shade to make drastic adjustments and the user to panic. From an interaction perspective, limiting the adjustment range to a constant allowed the user to see enough feedback without taxing the ability to immediately respond to drastic changes.

From the beginning, one of the goals of the project was to provide a method for interfacing with multiple remote devices. One of the simplest network topologies for this purpose is a star topology. 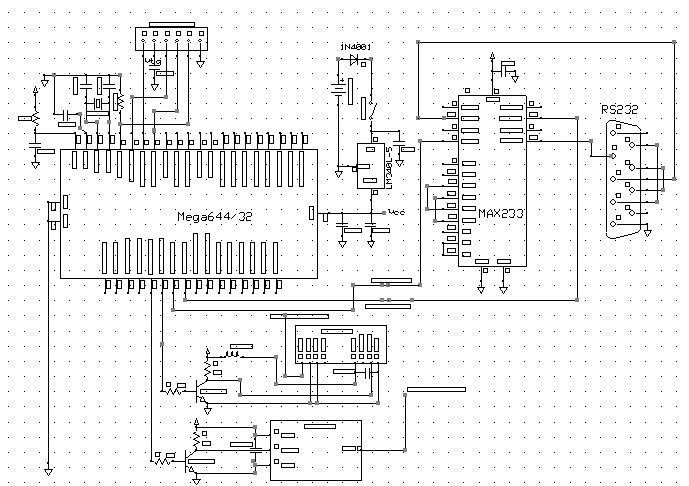 The blinds are moved up and down using 2 PF35T-48L stepper motors. The motors are optoisolated using 4N35 isolaters and powered by a ULN2003A Darlington Array. The stepper motors are used because of their accuracy since the blinds are expected to stop at specific positions depending on the user’s previous preferences. They both drive a single gear that increases the torque in the system, allowing shades to be reaised smoothly. Spools are used to roll up the string that holds the window shade. Pulleys are used to redirect the force of the pulling so that the single gear and rod are able to raise and lower the shade. The string goes through the holes of the original window shade frame, so that its outside appearance looks exactly like a normal window shade.

Introduction The Weather Canvas is a robust outdoor weather monitoring system coupled with an indoor LED display. The outdoor system...