When my little girl was born I wanted to make her a special night light for in her room. I made her a ceiling light with twinkling stars. It is made up of a piece of custom wood with 100 LEDs mounted in it. An AVR AT90S8538 micro controller runs a bascom program that produces a random pattern on these 100 LEDs. The LEDs are connected in a 8×13 matrix and the processor scans this matrix so that only 1 light is on at a time. Persistance of vision makes it look like there are many stars on at any one time.
The LEDs are all mounted in a customwood board. I drilled 5 mm holes randomly over this board and pushed the LEDs through from the back. I then screwed some old round curtain rail tubes to the board to stop it from sagging when it is hanging from the ceiling.
The LEDs were wired up with the wire taken from lenghts of CAT5 network cable which was simply wire wound onto the LED legs and later soldered for a good connection. The hole in the middle is so that the room light mains cabling can come through. It is secured to the ceiling by a couple of screws around the origonal room light so that when removed there are no holes in the ceiling.
The Controller 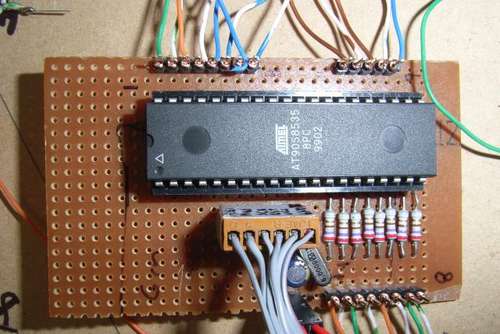 The controller is based on a AT90S8535 AVR Micro controller.  It is mounted on a piece of strip board (vero board) and mounted on the back of the lightboard in a central location.
For more Detail: Starry Ceiling for Kids Bedroom Using AT90S8538 microcontroller