We created a handheld mouse device that measures its tilt and then wirelessly transmits the data to a base unit, which is connected to a PC through a USB cable and can be recognized by certain modern computers as an actual mouse.
The purpose of this project was to explore the possibility of creating a wireless mouse that could be used in any location without having a flat surface to move it on. For this reason, we created a handheld device that uses accelerometers to detect its own orientation 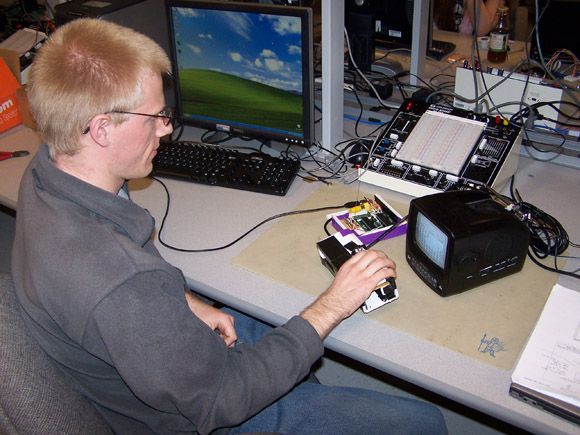 a feature that can be controlled by a user’s arm movements alone. We made the device transmit data wirelessly to a base station so that there would not need to be any wires connecting the handheld device to the computer it controls, which would limit range and comfort when using the mouse from a distance.

We later discovered we had an excess of computing power in our base unit, so we added an extra mode of operation by which the base unit could be connected to an analog TV via an RCA cable, and the user could play a game of Minesweeper using the wireless mouse.
top

The ideal device we had in mind was one that a user could control with simple arm movements without necessarily having to be sitting at the desk or other flat surface where the computer is located. This kind of device could be used for controlling a computer while giving presentations, or while located on the opposite side of a small room without having to relocate oneself toward the computer. We were inspired to combine features of several previous ECE 4760 mouse-related projects.
First, there was an accelerometer-based mouse by Karthikeyan Muthuswamy and Aseem Kohli, who described the idea as “cool” and hypothesized that it may reduce the risk of carpal tunnel syndrome by reducing pressure on the median nerve (see the National Institute of Neurological Disorders and Stroke fact sheet for more information).
Second, there was an easy input head-controlled keyboard and mouse project by Sara Xiangrong Huang, Jesse McMullen, and “Frank” Wai Shing Wong. This project used a wireless transmitter and receiver to relay information from a measurement unit to a base unit connected to a computer. We decided it was a good idea to separate our own project into handheld and base units to improve ease-of-use.
Third, there was a USB magnetic mouse project by Yiyin Ma and Abby Lin. From this project, we were inspired to have the base unit communicate with the computer over a USB cable, because USB ports are a very common feature on modern computers, whereas PS/2 ports are becoming increasingly rare.
The decision for implementing a Minesweeper game on the base unit was a result of an excess of computing power, to be discussed in the hardware design section.

Suppose a 1D accelerometer is represented by the rectangle. It can measure acceleration, either positive or negative, along one axis. If the accelerometer is tilted by an angle relative to vertical, then the acceleration it would experience due to the force of gravity is proportional to the sine of that angle. Thus, increasing the angle of tilt up to 90 degrees relative to vertical will increase the magnitude of the measured acceleration. As long as the accelerometer can detect accelerations up to 1g, it can measure the magnitude of tilt experienced by the handheld device in one direction. By placing two accelerometers positioned orthogonally on the handheld device, it is possible to measure the tilt of the device in two directions (corresponding to x and y mouse movements). 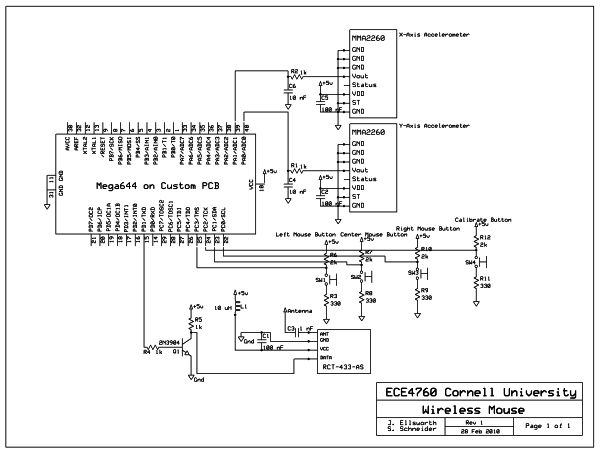 The high-level logical structure is represented in Figure 3. It shows the flow of information, from when data is first collected by accelerometers, to when it is sent to the computer or TV.

Introduction For our final design project, we built an automated Rock Band player that can beat any Rock Band song...