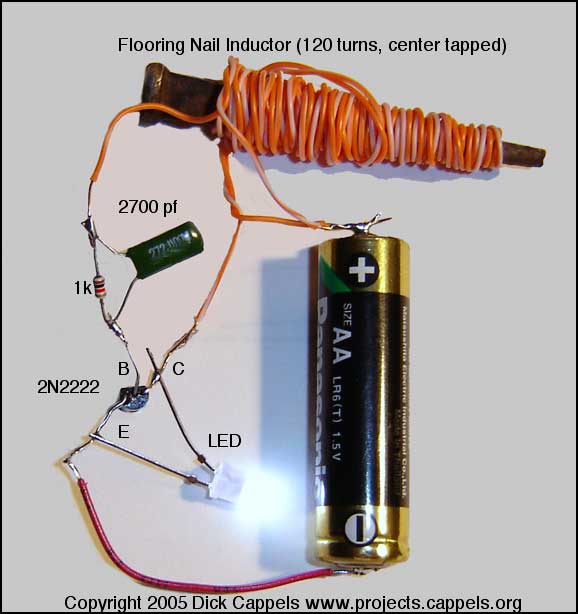 These blocking oscillator type power supplies work best with ferrite cores, and sometimes they can be hard to locate. Some readers have expressed anxiety over making inductors, and that is understandable since to many, inductors have an aura of mystery about them.
Just to prove that these inductors aren’t magic, or even that critical for that matter, I wound one on a rusty nail that I noticed laying beside the road one day while waiting for a tow truck. It is a 2-1/2 inch (6.5 cm) long flooring nail, which serves as the inductor’s core.
The wire is a twisted pair of #24 solid copper wire that I pulled from a length of CAT-5 (ethernet) cable, which is similar to the wire used to connect telephones inside buildings. I wound 60 turns of the twisted pair in about three layers around the flooring nail, then I connected the start end of one conductor to the finish end of the other conductor and that made it into a 120 turn center tapped inductor.
I connected it to a 2N2222, a 1K resistor, a 1.5 volt penlight cell, and a white LED. Nothing happened. Then, I put a .0027 uf capacitor across the 1 K resistor (it happened to be on the work bench) and the LED came on. Sometimes you need .001 uf or so. The LED glows nicely and the circuit draws 20 milliamps from the AA cell. The waveform on the oscilloscope looks terrible, but the point is that the circuit oscillated with even this rusty nail, and it boosted the output of the 1.5 volt AA cell to over 3 volts peak to drive the LED.
Those who are familiar with some aspects of coil core selection would quickly point out that the eddy currents would be huge since iron has a low resistance compared to ferrite, or air for that matter, and that there would also likely be other types of large losses.  The point here is not that you should run out and buy some flooring nails to make LED lamps, but that this circuit was not “designed”, but was thrown together and worked quite readily. If a rusty nail and some telephone wire is enough to light up a white LED, then the inductor is not so critical. So, relax, go buy a ferrite core and get started on your project.