An adapter to allow low capacitance probing of high frequency circuits.
Overview
My boss, Dave, said “Just hold the probe close to the cathode lead.” Dave had worked at Tektronix for many years, and his ability to make difficult measurements was second only to his abilities to manage a company and design clever circuits. Dave’s point was that, even though we didn’t have a an FET probe, we could measure wide band signals at a fairly high impedance point in the circuit by capacitively coupling though the air to the wire carrying the signal we were interested in. The capacitance between the wire and the probe would form a capacitive voltage divider with the probe’s input capacitance, and at frequencies significantly higher than the low frequency roll off created by the probe’s input capacitance and the probe’s resistance, the wave form would be faithfully reproduced, although it would have a reduced amplitude. 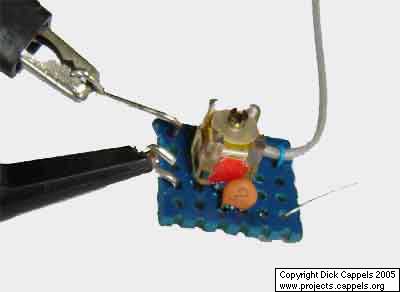 While working on a wide band amplifiers, I would often clip a small, 1 or 2 pf capacitor to my probe tip and use it to view the wave form at a high impedance point, such as the collector or drain of a transistor that is driving a resistive load. See the photographs above.  I realized that it would be more straight forward to just make a calibrated 10:1 capactive attenuator, so that I could then make calibrated measurements. This project is the old trick, made more convenient.
The circuit give here, presents about a 2 pf load to the circuit, and capacitively loads the circuit measurably less than the X100 voltage probe (A Stack CP-241) I often use for this sort of thing.
To make a X10 capacitive attenuator, simply select a variable capacitor, C2 that has an adjustment range that includes the capacitance, that when added to Cin, the input capacitance of the scope probe you are going to use with it, is nine times that of the coupling capacitor. In this circuit, the coupling capacitor, C1.  is 2 pf and the scope probe’s input capacitance is about 16 pf, so C2 is

READ  A Pretty Good Wattmeter For Bench Use using microcontroller

Atmel AVR Studio 4: AVR Studio 4 is an IDE, launched by atmel for providing better programming envoinment. It can...