Overview
I needed several current probes when designing the deflection circuits and high voltage supply for a computer display monitor, and the lab in which I was consulting only had one current probe, which I shared with the other four engineers on the project.  We did not really have a budget for test equipment on that project. Designing the deflection circuit included designing several inductors, a current transformer among them. It was merely a small diversion to design and put together a couple of simple current probes so I could, for example. simultaneously watch the base current and the collector current of switching transistors. 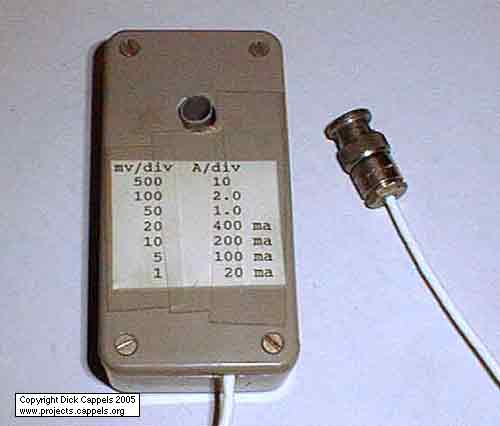 The probe described here was designed to be used over the range of several tens of Hz to a couple MHz with currents from a few tens of milliamps to about 10 amps peak-to-peak. Formulae are give which will allow you to create a design suitable for your own applications.
To use this probe, a wire is connected in series with the load that you want to see the current through, and that wire is passed through the hole in the probe. An oscilloscope is used to view and measure the current waveform, which is calibrated in terms of volts output per amp of input current. The sensitivty of the circuit can be multipled by using multiple turns in the sensing winding. For example, to get 5 times the sensitivity, pass the input wire through the hole in the toroid five times.  Of cousre, it would be much better to design the probe to have the sensitivity required for your application, but this trick is ok if you don’t have to do it too often.
This probe only measures AC current. 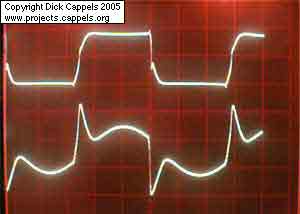 The current probe is a current transformer. A single loop of wire passes through the center of the toroid core, inducing current in the secondary. A 2.7 Ohm resistor is the termination resistor and a 1K pot is used to calibrate the output voltage as a function of input current.

Introduction It has been said that a man with one watch knows what time it is, but a man with...