INTRODUCTION
In our final design project for ECE 476: Microcontrollers, we decided to build a vehicle controlled, using accelerometers, by a remote control that wirelessly transmits, using RF technology, data to the vehicle to move in any direction. The accelerometers will be mounted on a steering wheel shaped remote control, such that if the user wants to move forward they can lean the steering wheel forward and backward for reverse; to turn left or right they need to turn the steering wheel like steering in an actual car, all in manual mode. In addition there is an automatic mode during which the vehicle goes in the direction requested by the user for the length of the distance requested by the user. 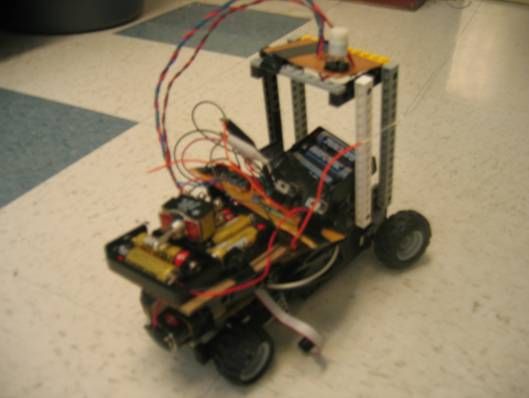 A liquid crystal display (LCD) is located on the remote control and displays the direction, distance and mode (manual or automatic), which is user choice using potentiometers to decide the direction and distance and mode by using a button. We decided on this project because of its ingenuity and similarity to game console systems games, which will appeal to users especially with the ease of use (physically moving the remote control). Additionally, we all love playing with remote controlled vehicles and we wanted to take it to the next step therefore creating an enjoyable form of entertainment for hours.
HIGH-LEVEL DESIGN
One major rationale behind the project was to design a remote controlled car that steers and accelerates by means of an accelerometer instead of a joystick. The accelerometer would be placed on a steering wheel that the user can shift left and right to steer left and right and shift forward and backward to make the car go forward or backward. The more the steering wheel shifts left or right, the more sharply the car turns left or right.
Another major rationale was to allow the user to make the car move a certain distance in a certain direction automatically without having to worry about the difficulties people sometimes have with maneuvering the car accurately. The user can operate two potentiometers: one that determines the direction of the car (NW, N, NE, E, SE, S, SW, W), and another that determines the distance that the car is to travel. When a button is pressed, the car can turn in the proper direction and move to the destination automatically. The user can press this button again to regain manual control.

The remote controller consists of an Atmega32 microcontroller circuit, an RCT-433-AS RF transmitter, a 7404 inverter, an MMA6261Q 2-dimensional accelerometer, two potentiometers, a pushbutton for toggling between modes and a liquid crystal display (LCD) that shows the command direction, command distance (for the car to travel in automatic mode), and a message stating whether the controller is in manual mode or automatic mode.
When the remote controller is powered, the accelerometer gives two outputs: one for the horizontal (left-right) direction and one for the forward-backward direction. Each output ranges from about 1V to 2V, with 1.5V meaning no shift along that axis. An ADC within the microcontroller converts the outputs to digital signals that are sent to the car through an inverter to the transmitter. In manual mode, the three signals being sent out of the transmitter are an integer for the servo motor (used for steering) that codes for a PWM value; two bits for the main motor (for the wheels) that tell whether the motor moves and its direction of rotation; and the mode (0 for manual, 1 for automatic). The code is programmed so that when the steering wheel is down flat, the car does not move. When the steering wheel is upright, the car moves forward. Steering the wheel left or right will move the car left or right. When the steering wheel is tilted in towards the chest, the car goes backward. The Y output of the accelerometer allows this implementation.
In automatic mode, the three signals being sent are the command direction (represented by an integer from 1 to 8), the traveling distance in feet and the mode number. The mode number is supposed to tell the car what to do with the incoming information.
As the potentiometers are rotated, the LCD update will update the command direction and distance shown. The potentiometer values will not be used until the user presses the button to switch to automatic mode.

The Atmega32 circuit, receiver, inverter chip and compass are all powered by the same 5V power supply. The servo motor runs off of a 3.7V power supply, but must still be grounded from the same ground as the MCU. The main motor runs off a separate power supply all together. An optoisolator protects the rest of the circuit from the noise of the main motor. An H bridge is used to channel a sufficient amount of current into the motor in either direction to allow the motor to rotate in either direction. A 10uF capacitor is used to filter out noise on the power line due to the two motors.
The RF receiver has 8 leads. The first lead is the antenna, which like the transmitter must be wavelength long. Pins 2,3,8 are grounded and pins 4,5 are powered. Pin 6 is the analog output, which is not used. Pin 7 is the digital output, and is connected to pin 0 of PORTD through an inverter. This inverter inverts the signal back to what it was when it was outputted from pin 1 of PORTD on the remote controller.
The servo motor has 3 leads: power, ground and signal. The signal lead is connected to pin 3 of PORTB where it is fed the PWM signal whose duty cycle determines the angular position. The servo motor was assembled into the Lego car in such a way that when it makes a complete rotation, the wheels turns from all the way left to all the way right.

We used the wireless protocol written and designed by Meghan Desai. The RF transmitter and receiver circuits also were designed by a corporation from which we bought the circuits. We also based our custom PC board on Bruce Lands design that is shown on the ECE 476 website. Finally, the H Bridge was borrowed from one of the TAs that was in the class last year, Tytus Mak and Daniel DiBernardo, and was the most effective. 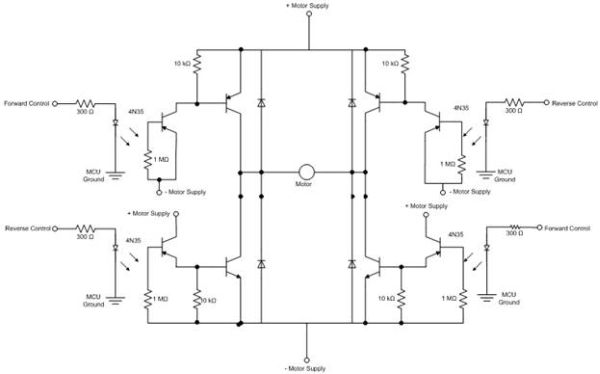 In our robotic vehicle design project, we will need to take a few safety issues into consideration. Firstly is the controller for the robotic vehicle, which will be manipulating the vehicle wirelessly. We will be using an RF (radio frequency) protocol that will follow all safety regulations instituted by ANSI and IEEE for using such wireless technologies without affecting humans at all since the FCC does not mandate any federal regulations as of yet and recommends using these as the federal standards. This will be done by limiting the frequency between 100-300 MHz and using 0.1-0.4 W/kg as stated by ANSI and the IEEE, which is done by using the protocol suggested by Meghan Desai.

(Phys.org) —A team of researchers working at Northwest A&F University in China has found that introducing a particular mouse gene...