I was asked to give a workshop regarding sound art in Super Public Art School that is held at Titanik-gallery in Turku. As I have been working lately with microcontroller based sound synthesis I searched for a good topic around this area. So the idea to build pocket sized audio players came a long. So here we go:

From prehistorical computer era, one of the first applications outside of the scope of actual computation has been how to generate music with a machine only capable of conducting logical operations. Nowadays computer are faster than engineers of early 20th century could hope for and interest in this low level hacking has mostly ended. But during last few years, as the usage of ultrasmall but equally slow computers – microcontrollers – has rapidly grown amongst  non-engineers: artists, hackers and makers, again larger number or people are trying to synthesize music with fairly limited tools.
The final product in this workshop is a stand alone pocket player that plays through these one line symphonys indefinetly while the power is switched on. At first attendees will search an interesting line of code. Then a pocket sized player device is built. Last step is to insert the line of code to the player. 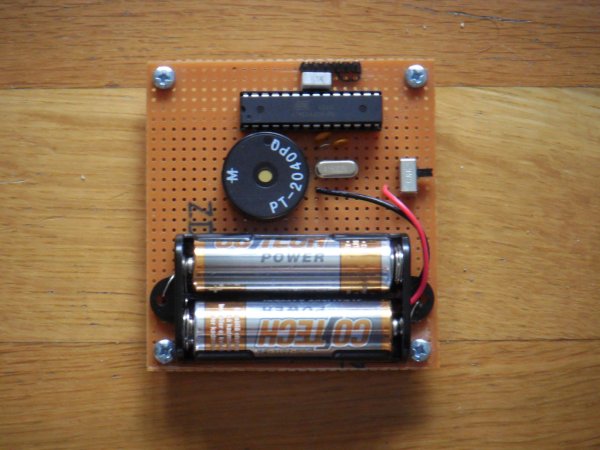 Naturally attendees can modify this project to suit their needs. Here is some video of my simple and minimalistic proto version.
I’m hoping that the subject of this workshop scales up nicely depending of each individual participant. It is not necessary to understand much if nothing on either the electronic or programming side of this project to be able to finish it. But if one is more advanced there are zillion of things one can expand this project to make it more meaningful for oneself.

There are few projects I would like to mention here as they will form a bases of our pocket player.
2009-2010 Tristan Perich released his piece 1-Bit Symphony that gathered wide international attention. The piece is a microcontroller based electronic circuit built inside a CD-case. The microcontroller executes a program that will produce a piece qualifying as a symphony in real time.
I can’t ignore the classic pocket player hit Buddha Machine here neither. This is project created by Christiaan Virant who has been able to sell thousands of these during last couple of years. On the video is some random dude demonstrating the usage and features of one of these.

We start by searching a decent line of code producing our symphony. There is lots of detail information about the theory behind the code at VIznut’s blog, but mostly the ‘composing’ phase is about random experiments. Though it is good to know the fundamentals of bitmath. Mostly to avoid spelling errors within the code. One can find online sound generator for testing out different lines. Although the microcontroller of our pocket player is not able to generate awfully long lines, so it makes sense to keep lines rather short.

The hardware is a circuit designed around ATMega328 microcontroller. It is basically a minimal version of Arduino board. Each board will have at least following components: 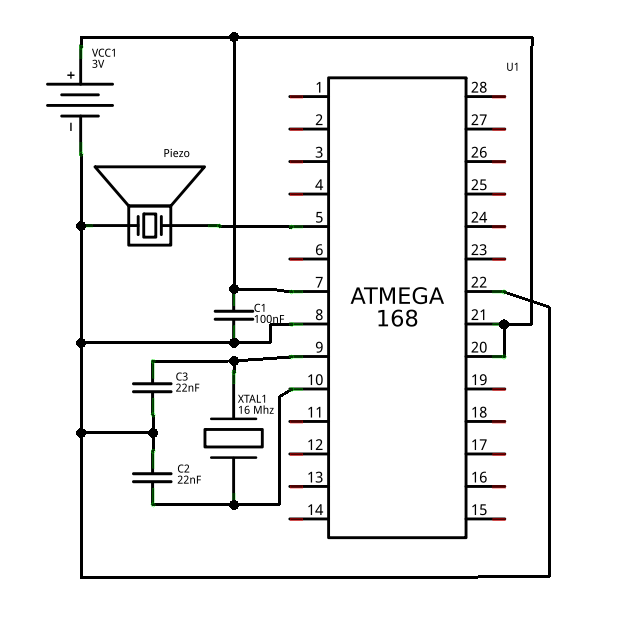 When working with battery power, we could probably skip all caps, but then again we want to be safe here. Note that this is very minimal setup, you will not be able to reprogram the chip through this circuit and the circuit does not include any input interface (such as button etc.). One can find a schematic of this ǔber simple schematic below:

Here is my Chronos watch controlled rover. The rover has a CC1110 minikit that receives SimpliciTI messages from the watch...