Here is my Chronos watch controlled rover. The rover has a CC1110 minikit that receives SimpliciTI messages from the watch and sends this to an Arduino (AVR) over serial. The Arduino controls the motors and the servo controlling the robot arm.
I have called this thing a robot, which is not strictly correct, as a robot needs to be autonomous. Some of the other ‘objects’ that I’ve made are robots, while this one is a remote controlled car. But I think it’s still quite cool to be able to control it from a watch. The buttons control the grabber and the accelerometer controls the speed and direction. It’s not a big project. It took less than a day to do. 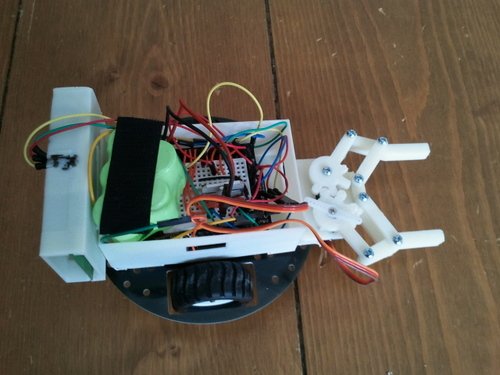 The accelerometer om the watch controls the vehicle. Tilt the watch forward and the robot moves forward. Tilt the watch to the side, and the robot turns. The left top and bottom buttons control the grabber.
The watch records the data from its accelerometer continuously and sends this to the robot. Any key presses on the watch are also sent.
The robot arm is printed on my 3D printer based on a model from jjshortcut on thingiverse.
The motors and base it’s placed on is this kit for dfrobot.
As you can see on the attached video, I still need some practice in driving it or some tuning of the control mechanism. Since I made the first video, I adjusted the firmware so that when the grabber is open, the speed is slower and it is easier to control the robot. When the grabber is closed, the robot moves fast. This makes it a lot easier to pick up objects and move them somewhere. The second video is on this page now.

READ  Relais Board Using AT2313

USB OTG (On-The-Go) cable enables for example a simple connection of USB slave devices with a smartphone. As we know,...