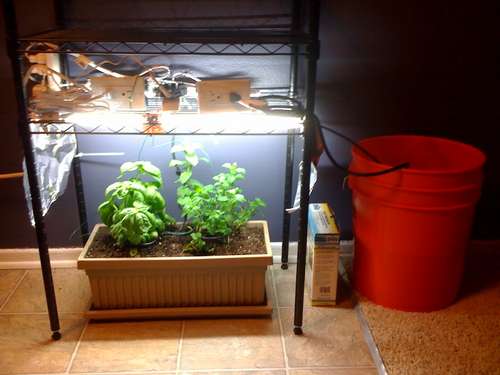 A couple months ago I came across two great instructables.  The first was the Garduino, an arduino controlled garden to help you grow plants at home.  The second was the Tweet-a-Watt, a project that teaches you how to monitor your home power usage using Xbees and Twitter.  I read about both these projects here at Instructables and in Make Magazine, Vol 18.
I thought it would be great to combine both these projects and build myself an indoor garden that I could monitor from work via Twitter.  Thus began an adventure in gardening and electronics that taught me a lot and took me much longer than perhaps it should have.  Fortunately for you I’m going to write down all the steps so you can get started right away.  Maybe you’ll follow up with this project and upgrade your garden or use this as a guide to start on a similar project.  Either way, I hope you’ll let me know what you get up to.
If you’re ready then head to the next step and begin the process!
Edit: Please see the code now posted on GitHub – https://github.com/chrisgilmerproj/garduino-upgrade

This project is really two projects in one.  It is both a gardening project and a wireless project.  But, as is true with any project, getting your materials will probably be the hardest part.  This is because building can move along pretty fast once you have everything, but it’s finding out you’re missing the one crucial piece that always holds things up.  Below is a list of web pages from my wiki with a list of all the parts you’ll need.  Go ahead and take a look, I’ve listed them with as much detail as I could and if I’ve left something out just let me know so I can add it to the list.
Various Parts Lists:
READ  PCB Exposure Box with Countdown timer using ATMEGA8 microcontroller

I highly recommend you buy a couple extra parts here and there.  You’ll find, as I did, that they come in handy when you make a mistake.  For the majority of the parts nothing is particularly expensive so buying a few extra things won’t hurt.

The Garduino Instructable is probably your best resource for starting this project.  It has tons of great insights that will help you get started with your own arduino controlled garden.  He has also put together a website with more pictures and a kit that you can get, but I chose to build this project with my own parts.
When you get started you’ll want to get some plants and a place to plant them.  I recommend a local gardening store where possible.  You’ll pick up some healthy plants there and probably a few good tips on how to care for them.  I picked up basil and mint, a couple plants I’d find useful to have for cooking.  I also got an 8″ x 18″ planter with a matching dish to catch water.  You can certainly go out and use tubs or custom pots, just choose what’s right for you and your plants.  Also, pick something that will look nice around your house if that’s important to you.
The first thing that is different about my project is that I was building an indoor garden.  My apartment doesn’t have a lot of light from any of the windows, nor does any good light fall on the patio.  This changed a lot of the parameters for my garden.  For one, I didn’t need a light or temperature sensor, something I discovered after the fact, as my light will be constant from the fluorescent bulb and my temperature inside the apartment is pretty stable.
I also learned that whether you choose to keep your plants inside or outside you should be aware of bugs.  My first plants died because of spider mites, something I hadn’t even thought of when starting this project.  I found the solution was actually pretty easy, involving a spray bottle, a tiny bit of soap and water.  It’s a much cleaner solution, especially if you plan to eat your plants, and doesn’t hurt the environment either. 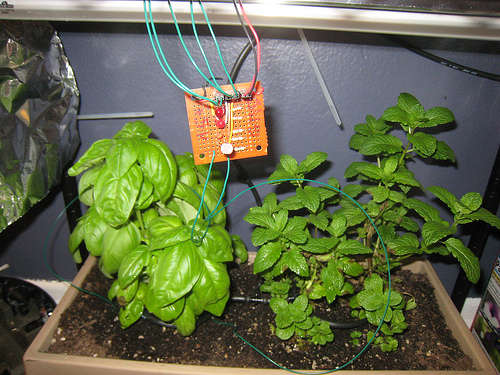 One of my early upgrades to this project was to take the sensors off the arduino and put them closer to the plants.  I wanted to do this primarily to keep the arduino as far away from the water and water pump as possible.  The nice thing about this is that you can put your arduino somewhere accessible and safe and keep the sensors you want closer to the plants, where they are needed.  Is this a good idea?  Maybe, but I was happy to do it.
My sensor was designed to have the temperature, light and moisture sensors onboard.  Also, I included 2 red LEDs so that I could indicate if the plants were being watered or if the temperature went out of an acceptable range.  Of course this was before I had decided to keep the plants indoors, so in retrospect I’d probably ditch the temp and light sensor and leave the LED on the arduino.  Better yet I could have just used the onboard LED connected to pin 13 on the arduino.  Then all I’d have is two wires leaving the arduino to act as the moisture sensor for the plant.  Regardless, this was a fun part of the project and I learned a lot.
You can download the schematic and board layout files I created.  I decided to build the board by hand instead of having it manufactured for me primarily due to cost.

The most important upgrade I think I made was to build real relay boxes to control my power to the light and the water pump.  With water so close to the electricity I figured a safer approach was needed than the one used in the original Garduino instructable.  Fortunately the author pointed out a great resource at SparkFun that I used to do the project.
Finding the whole thing incredibly useful I wrote up another instructable on how I built my relay boxes and made it more generic for other projects where you might want an arduino to control power.  Check out the Arduino Controlled Relay Box Instructable when you get a chance.
At this point I decided to add on an arduino protoboard to my project so that I could have access to more power lines without having to solder together a new breadboard.  You may choose to do something different, but this made things significantly easier, especially if I decide to do more modification later.
If you don’t do anything else with your Garduino definitely do this upgrade.  It’s definitely the most important.
For more Detail: Garduino Upgrade, Now with more Twitter!

Garduino is a gardening Arduino. So far, Garduino: -Waters my plants whenever their soil moisture level drops below a predefined...