Unless you’ve been living under a digital rock for the last few years, or just simply aren’t interested in flashing lights, you’ll already know about the awesomeness that is the BlinkM from ThingM. It’s a very small PCB featuring a high power LED that responds very easily and cleanly to commands you give it. Devices like BlinkM’s are often referred to as LED Pixels, because they can be linked together in fairly long chains, but still remain individually addressable (you can set the colour of each one to be different).
Right now, I’d like to give out mad props to ThingM and todbot, without whom there would be no BlinkM, and the world (or at least youtube) would be a much less colourful place. The aim of this instructable is not to take business away from ThingM, in almost all cases I would encourage you to buy a blinkM or two if you need them in your project, but there are some reasons why it’s good to have alternatives and these are the ones I’m thinking of: 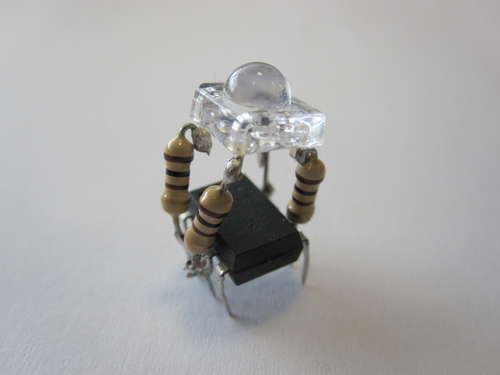 For me, this project came about because of the first three in the above list. I needed 7 pixels, which is a few more blinkM’s than my budget can stretch too, I had a bunch of parts already lying around and lot of spare solder (although the free time bit is always an issue) and yes, I’m a sucker for the impractical.  “Why buy something when you can spend hours and hours of your precious free time trying to work out how it’s done and failing multiple times before finally suceeding, sort of, and ending up with something that is nearly, but not quite as good as you can buy.”  I probably need to readjust my priorities in life.


READ  Music Playing Alarm Clock using ATmega644 microcontroller
So, The aims of this instructable will be to:

From now on I’m going to stop using the name BlinkM to describe the product of this instructable, it’s just not fair to ThingM. What I’m building isn’t as good as a BlinkM, and I don’t want people to think that the BlinkM is less awesome than it actually is, but it’s been useful as an introduction because everyone is so familiar with the concept. From now on, I’m in the Ghetto Pixel building business.
Lets get started, gather your stuff.
For more Detail: Using ATTiny45 Microcontroller Ghetto Pixels – Building an open source BlinkM