Making our projects Wireless always makes it to look cool and also extends the range in which it can be controlled. Starting from using a normal IR LED for short distance wireless control till an ESP8266 for worldwide HTTP control, there are lots of ways to control something wirelessly. In this project we learn how to build wireless projects using a 433 MHz RF module and AVR microcontroller. 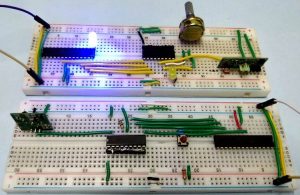 In this project we do following things:-

You can download these softwares from the given links:

Before going into the schematics and codes, let’s understand the working of RF module with Encoder-Decoder ICs.

Those are the transmitter and receiver modules we are using in the project. It is the cheapest module available for 433 MHz These modules accepts serial data in one channel.

If we see the specifications of the modules, the transmitter is rated for 3.5-12V operation as input voltage and the transmit distance is 20-200 meters. It does transmit in AM (Audio Modulation) protocol at 433 MHz frequency. We can transfer data at a speed of 4KB/S with 10mW power. 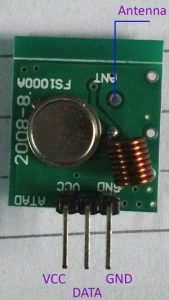 In the upper image we can see the pin-out of the Transmitter module. From the left to right the pins are VCC, DATA and GND.  We can also add the antenna and solder it on the point denoted in the above image.

For the Receiver specification, the Receiver has a rating of 5V dc and 4MA Quiescent current as input. The receiving frequency is 433.92 MHz with a -105DB sensitivity. 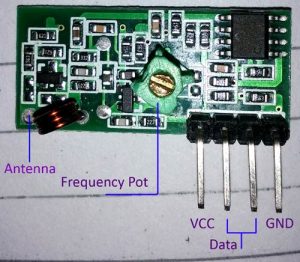 In the above image we can see the pin-out of the receiver module. The four pins are from Left to right, VCC, DATA, DATA and GND. Those middle two pins are internally connected. We can use any one or both. But it is a good practice to use both for lowering the noise coupling.

Also, one thing is not mentioned in the datasheet, the variable inductor or POT at the middle of the module is used for frequency calibration. If we couldn’t receive the transmitted data, there are possibilities that the transmitting and receiving frequencies are not matched. This is a RF circuit and we need to tune the transmitter at the perfect transmitted frequency point.  Also, same as the transmitter, this module also has an Antenna port; we can solder wire in coiled form for longer reception.

The transmission range is dependable on the voltage supplied to the Transmitter and the length of the antennas in both side. For this specific project we did not used external antenna and used 5V at the transmitter side. We checked with 5 meters distance and it worked perfectly.

Circuit Diagram for RF Transmitter side 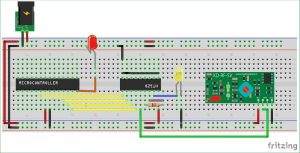 Circuit Diagram for RF Receiver Side 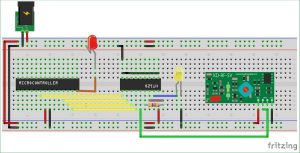 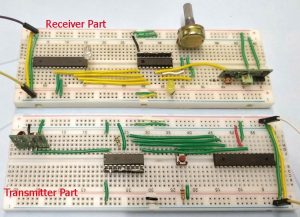 After installing these softwares follow the below steps to create project and writing code: 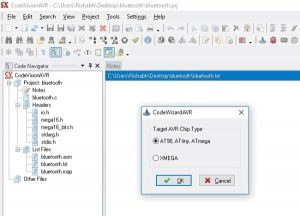 Step 3. Choose your microcontroller chip, here we will take Atmega8 as shown. 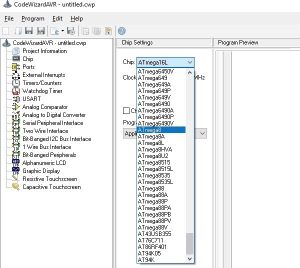 Step 4:- Click on Ports. In Transmitter part, Pushbutton is our input and 4 data lines are output. So, we have to initialize 4 pins of Atmega as output. Click on Port D. Make Bit 7, 6, 5 and 4 as out by clicking on it.

Step 5:- Click on Program -> Generate, Save and Exit. Now, more than half of our work is completed 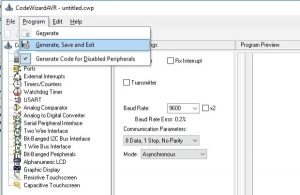 Step 6:- Make a New folder on desktop so, that our files remains in folder otherwise it will be scattered on whole desktop window. Name your folder as you want and I suggest use the same name to save program files.

We will be having three dialogue boxes one after other to save files. Do the same with other two dialogue boxes which will appear after you save the first. 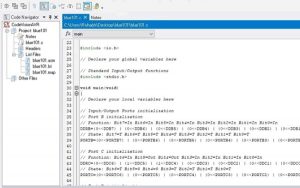 Our most of the work is completed with the help of the Wizard. Now, we have to write only few lines of code for transmitter and receiver part and That’s it…

Follow the same steps to create files for Receiver part. In receiver part, only Led is our output so make Port B0 bit to out.

We will write code for toggling the LED wirelessly using RF. Complete code for both the Atmega at transmitter and Receiver sides are given at the end of this article.

First Include delay.h header file to use delay in our code.

Now, come to the last lines of code where you will find a while loop. Our main code will be in this loop.

Now come to the while loop. In this loop, store incoming bytes to a char variable byte and check if the incoming byte is same as we write in our transmitter part. If bytes are same, make PortB.0 high and take NOT of PORTB.0 for toggling the LED.

Our code is completed. Now, we have to Build our project. Click on Build the project icon as shown. 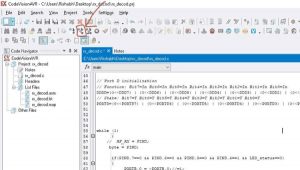 After building the project, a HEX file is generated in the Debug-> Exe folder which can be found in the folder which you have made previously to save your project. We will use this HEX file to upload in Atmega8 using Sinaprog software.

Upload the code to Atmega8

Connect your circuits according to given diagram to program Atmega8. Hookup the one side of FRC cable to USBASP programmer and other side will connect to SPI pins of microcontroller as described below:

Connect the remaining components on the breadboard as per circuit diagram and open the Sinaprog.

We will upload the above generated Hex file using the Sinaprog, so open it and Choose Atmega8 from Device drop down menu. Select the HEX file from the Debug-> Exe folder as shown. 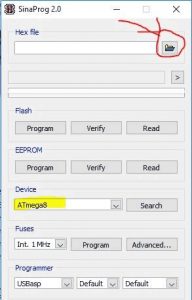 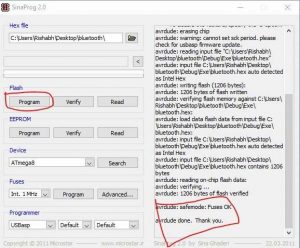 You are done and your Microcontroller is programmed. Use same steps to program another Atmega at receiver side.

Complete code and demonstration Video is given below.

L20G20IS Gyroscope: The secret behind the perfect picture