This project is to make a clone of Arduino Leonardo in a simple way.That is why the distribution of the pin does not match the standard Arduino (have to make many jumpers on the motherboard or use both sides). However, most Arduino Leonardo characteristics are maintained.
The circuit is protected by an automatic reset fuse (PTC) of 500 mA to prevent neglect we load up a USB port.
The food selection is not done automatically, but we have to select it manually using a bridge (external power / USB).
The circuit is “based” on the one by JM in Testing the ATmega (32/16) u4 to which I added just a voltage regulator, fuse protection and the numbering of the pins on Arduino Leonardo according to the following document . 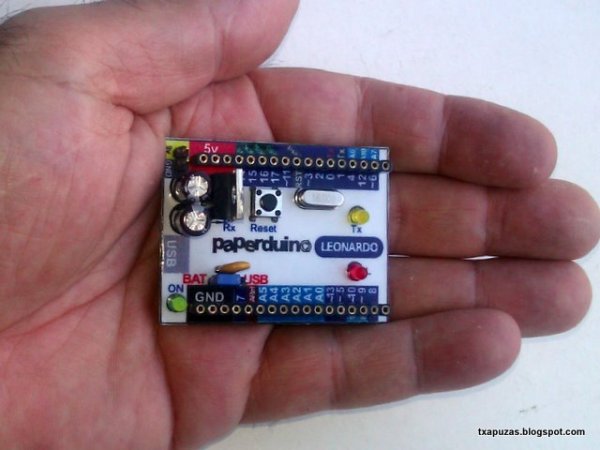 NOTE: This project is carried out with a draft version of the Arduino environment, the Arduino-1.0rc2, soon Arduino guys have released the final version 1.0, which have been a number of changes:

For now, the possibility of further changes, (until you exit the Arduino Leonardo Journal), I do not have correct change.
Note: The external power connector does not have polarity and the circuit has no protection diode against reverse polarity, so when cuidadín connect the battery!

Leonardo used as ATmega32u4 chip is not necessary USB converter chip, the chip because it has internally, simplifying the circuit. (Wire not be necessary as in the other FTDI Paperduinos).
The scheme of our circuit is quite simple:

NOTE: When the plate I noticed that the Rx LEDs (8) and Tx (22) are reversed, ie, remain on constantly and off to receive and transmit data. This does not affect circuit operation, but anyway if you want to change it, would have to invest the LEDs and connected to 5 volts.Pending Arduino people do some modification, for now I will correct this minor flaw, and hope to come out the final version of Leonardo.
At the bottom left is the regulator with its associated capacitors 7805, allowing us to feed our Paperduino with a voltage between 7v and 14v at the connector J1. We also see the bridge selection J5 power, either through 7805 or through the USB connector. By the LED D1 receives check that the correct voltage circuit.
On the lefthand side we see the J2 connector, which has the top four 5v terminals for use in our circuits. Then we have direct connection to the pins of the chip, PB0 pin having an LED indicator is received by the serial port with pull-up resistor, and a pushbutton RESET pin to ground and pull up resistor.
See the top of stabilizing the chip capacitors.
On the right side we have the J3 connector scheme, which provides in its top 4 terminals to ground for use in our circuit, then gives us access to pins input / output chip, and certainly has a diode LED on the pin 13!.
In the bottom of the chart we see the glass with their associated capacitors, mini USB connector, with fuse protection. The pin 22 have the LED indicator signal transmission through the serial port. And we 33 the low level to prevent access to the bootloader. 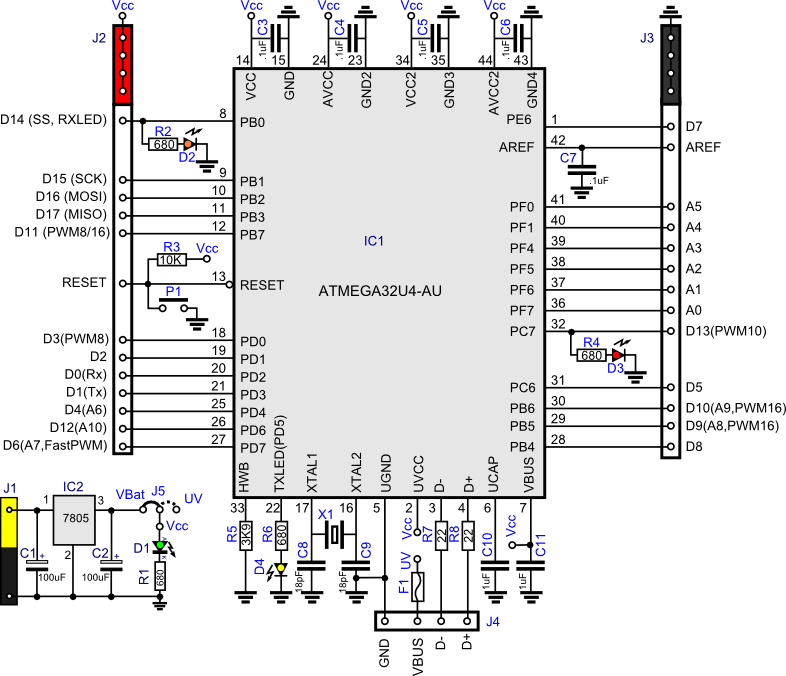 Easy Input is a head-controlled keyboard and mouse input device for disabled users. The system uses accelerometers to detect the...