Posted By: Adminon: June 14, 2013In: How It WorksNo Comments
Print Email
Share this:

A DVD is very similar to a CD, but it has a much larger data capacity. A standard DVD holds about seven times more data than a CD does. This huge capacity means that a DVD has enough room to store a full-length, MPEG-2-encoded movie, as well as a lot of other information. 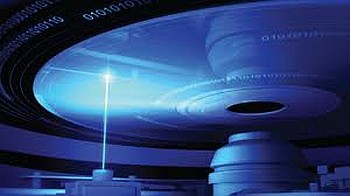 Here are the typical contents of a DVD movie:

DVD can also be used to store almost eight hours of CD-quality music per side.
The format offers many advantages over VHS tapes:

DVDs are of the same diameter and thickness as CDs, and they are made using some of the same materials and manufacturing methods. Like a CD, the data on a DVD is encoded in the form of small pits and bumps in the track of the disc.
A DVD is composed of several layers of plastic, totaling about 1.2 millimeters thick. Each layer is created by injection molding polycarbonate plastic. This process forms a disc that has microscopic bumps arranged as a single, continuous and extremely long spiral track of data. More on the bumps later.
Once the clear pieces of polycarbonate are formed, a thin reflective layer is sputtered onto the disc, covering the bumps. Aluminum is used behind the inner layers, but a semi-reflective gold layer is used for the outer layers, allowing the laser to focus through the outer and onto the inner layers. After all of the layers are made, each one is coated with lacquer, squeezed together and cured under infrared light. For single-sided discs, the label is silk-screened onto the nonreadable side. Double-sided discs are printed only on the nonreadable area near the hole in the middle. Cross sections of the various types of completed DVDs (not to scale) look like this:
Each writable layer of a DVD has a spiral track of data. On single-layer DVDs, the track always circles from the inside of the disc to the outside. That the spiral track starts at the center means that a single-layer DVD can be smaller than 12 centimeters if desired.
What the image to the left cannot impress upon you is how incredibly tiny the data track is — just 740 nanometers separate one track from the next (a nanometer is a billionth of a meter). And the elongated bumps that make up the track are each 320 nanometers wide, a minimum of 400 nanometers long and 120 nanometers high. The following figure illustrates looking through the polycarbonate layer at the bumps.
You will often read about “pits” on a DVD instead of bumps. They appear as pits on the aluminum side, but on the side that the laser reads from, they are bumps.
The microscopic dimensions of the bumps make the spiral track on a DVD extremely long. If you could lift the data track off a single layer of a DVD, and stretch it out into a straight line, it would be almost 7.5 miles long! That means that a double-sided, double-layer DVD would have 30 miles (48 km) of data!
To read bumps this small you need an incredibly precise disc-reading mechanism.
For more Details: How DVDs Work

DESCRIPTION This project is to make a clone of Arduino Leonardo in a simple way.That is why the distribution of...