Our project is creating a miniature golf game, complete with a putter and golf ball to simulate a real putting stroke. 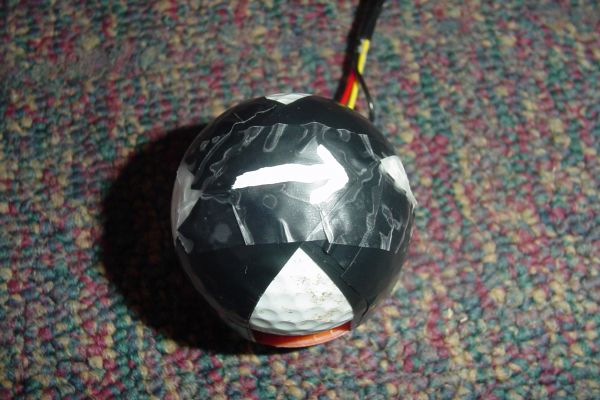 We chose to construct a mini golf game because not only is it interesting, but it has a large balance of computer programming as well as hardware design. Looking from the highest level, the project can be divided in two: the programming code, and the remaining hardware peripherals. The project uses 1 MCU on the STK 500 development board, which is programmed with our entire code. This code draws the entire course, and controls the resulting putt. The direction and speed of the put are controlled by two outside inputs: the putter and the ball. These are all integrated to complete our miniature golf game.

RATIONALE OF PROJECT:
We began selecting this project by identifying the need for a fun and entertaining final project whose construction required a nice balance between computer programming and hardware design skills (our group, 3 members combined, would result in 2 EE majors, 1EE minor, 1CS major, and 1 CS minor). The general idea resulting from this would be a computer game, with additional input and output devices that we used in the game for real-time user interaction.
After tossing standard video game ideas away, which would interface with only a joystick, we remembered how fun it was to play miniature golf as a kid! Actually, one of us played it over Spring Break. Each of us being a fan of the game, making a miniature golf game provided the nice design balance, as well as entertainment.
The project can easily be divided into two parts: the Atmel programming code, and the hardware design. The fundamentals behind the miniature golf game should be obvious, but our game is interesting in that we believed we could use an actual putter and ball to use as the user input for a stroke in the game. Though for sure miniature golf games have been created on electronic hand held games, it is likely that none use a real putter to determine shot velocity.
GENERAL LAYOUT STRUCTURE:
Our project consists of the game code, the putter and golf ball combination, and their interaction. In general, the user boots us the program to see a title screen, hitting any button to proceed to the 1st hole of this 9 hole course, and a scoring grid that keeps track of the total strokes. He uses only the putter to control the game, including shot direction and power. This force is gauged by an accelerometer chip that is attached to the ball. The golfer repeats these steps until the hole, and then eventually the course, is finished.
APPLICABLE STANDARDS:
We followed the RS-170 video standard.  This is the standard used in North American and Japanese black and white television.  This requires 30 frames per second, and 525 lines per frame.  We modified the number of lines per frame to make the calculations faster, and thus easier to finish all the calculations during the short period of time before we had to be ready to send out the next frame.  We first chose to only use the odd lines, reducing the number of lines per frame to 262.  Then, we only used lines 30-230, and of these, we doubled up the lines so we only had 100 lines (this reduced flicker, and also reduced the number of calculations necessary per frame.
When we want to create a line (to be displayed on the television), we have to start with a horizontal sync pulse of 5 us at 0V.  Then, we have to create a “Back Porch” portion of the signal, which is a 5.9us signal at 0.3 V.  Then, we have 51.5 us to send out our desired picture.  This is done by black being 0.3 V and white being 1.0 V, and the voltages in between 0.3 and 1.0 correspond with varying grays.  The position in time of the voltage corresponds to the position of that pixel on the screen.  Once we finish sending out the signal for the picture, we have to have a 1.4 us “Front Porch” section of the signal, before starting on the next line.
Once we finish sending out the signals for all the lines in the frame, we have to send a “New Frame” signal.  This consists of a series of three 63.55 us vertical sync signals.  This directs the TV to return to the top of the screen, and start drawing from there.

USE OF OTHERS’ MATERIAL:
We utilized code from a previous 476 lab, where we had a TV display.  We asked permission of our instructor, Professor Bruce Land, before using his code.  It is available from  http://instruct1.cit.cornell.edu/courses/ee476/ . 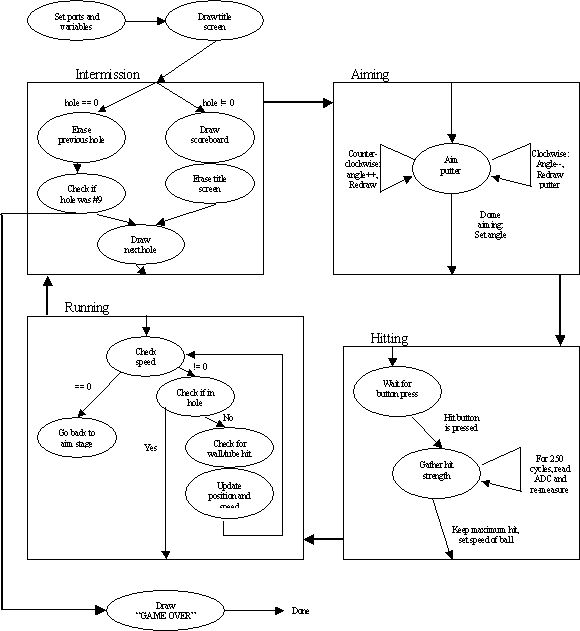 The chip is powered by a voltage between 4 and 6V, so we conveniently were able to use the processors 5V. As noted above, we had to set the stroke direction 45 degrees off-axis. In order to make our game accurate, we had to be able to hit the ball 45 degrees off axis, repeatable. However, the golf ball keeps rolling around. Thus, we devised a way to keep the ball steady: by using a Gatorade bottle cap. This cap was cut through slightly to allow part of the accelerometer IC to poke through. Then, insulation was place inside the cap, and the ball placed on top of that. The whole unit was then taped together tightly to prevent slippage. A white arrow was painted with whit-out over the black tape, to specify the direction the ball should be struck. It is our hope that with this flat cap, and a secured ball, the user will be able to strike the ball accurately every time.

Video Signal Generation
In order to use the TV, we are using a standard NTSC video signal that is not interlaced. This standard is described later in the standards section, and is identical to what we used earlier in the class for the TV oscilloscope lab. The only hardware needed for this was to set the correct voltage levels for output according to synch and voltage output. The following circuit performed this task:
As you can see, the hardware combined is not very complex, but simplicity is often why a circuit works! Besides the putter, ball, and video generation circuit, the only other hardware feature we used was the STK 500 development board, provided for us.

A rapid process of urbanisation and an expanding middle class with increasingly western tastes will keep energy consumption and carbon...