The Weeboy is a portable color video game system that is not dependent on stationary displays or external power sources and features novel tilt-based control. 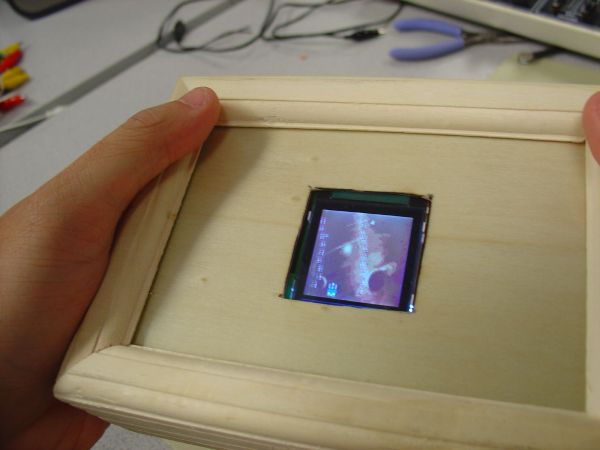 Our purpose for designing this project was to demonstrate that a complete portable video game system could be implemented at an affordable price. There currently exists a large community of “homebrew” and DIY video game hobbyists who develop their own games for portable consoles. This practice is usually very expensive, as the total hardware required can cost more than $150(the GP2X, a programmable linux-based portable console, costs $189.99. Programmable 2G flash cartridges for the Gameboy Advance cost $137.26, which does not include the price of the console). By pulling together a handful of low-cost parts and building the system ourselves, we have demonstrated that a complete programmable portable console can be had for less than $70, even when purchasing the parts we sampled. Our implemenation runs on a single 9V battery and features tilt-based control, monophonic sound, and 3 playable games. We call it the Weeboy because it combines features of the Nintendo Gameboy Color and the Nintendo Wii.

Our original source of inspiration for this project was the Color LCD 128×128 Nokia knock-off which Professor Land recommended from the ECE 476 web page. This LCD was intriguing because it supported color, was inexpensive, was small enough to fit inside a small container, and had a good amount of sample code which was contributed by the hobbyist community. In our efforts to come up with a novel design project related to video games, we realized that a portable standalone console had not been attempted before and it was obvious that this LCD would be perfect for the project.
From the beginning we planned to use a total of 6 push buttons to control the system, but Professor Land informed us that he had sample accelerometers from Freescale which could be used for tilt-based control and we opted for one of those to replace four of our buttons. This was ideal because it saved us $4 in our budget and it made the user experience much more novel and exciting.
The rest of the parts, including the speaker, container, and battery, were components that we expected in our initial write-up for the project and we were able to afford everything within our budget.
The complete system functions as such: the Atmel Mega32 microcontroller contains all the code for controlling the system as well as backgrounds and a font stored in flash memory. The accelerometer is an input to the Mega32 which is sampled by the on-board ADC. This data is used to check whether the user has tilted the system, and the direction of the tilt translates to movement in-game. There are also two push buttons at the front shoulders of the container which are used for actions on the menu and in the paint game. The Mega32 draws the display by sending coordinates and colors to the LCD via the SPI. The Mega32 also outputs sound with the PWM to a small piezoelectric speaker. The system is powered by a 9V battery on a board which was also a sample from Freescale. This board provides a regulated 3V supply for the LCD and accelerometer. It is also connected directly at the 9V head to the PCB which holds the Mega32.
On starting the system, the user is prompted with a menu where the left button is pressed to select from the three games or toggle the sound and the right button is pressed to start the selected game. In the first game, called “Dodge,” the user tilts the system to avoid two balls coming towards the player from the top of the screen. Holding the right button slows the balls considerably. Upon being hit, the player dies and the score and high score are displayed. Pressing the left button returns to the menu screen. The second game, called “Tunnel,” is very similar except that the player is trapped in a tunnel of missiles that move side-to-side on the screen. Also, the player can only move horizontally in this game. The third game, called “Paint,” does not have a win or lose condition and is more of a toy. The user can tilt to move a cursor around the screen. The left button is used to change the current color and the right is used to draw a colored block at the current location. The user can point at the top bar and press the right button to return to the menu screen. Upon exiting Paint, the complete canvas is preserved.
The software for the system is based on a simple function for sending a color to an x,y position on the LCD screen. From this, functions for drawing sprites, background, text and random colors were developed. The main challenges were speed and memory space, and the techniques used to overcome these challenges are explained in the following section.
There were serious hardware and software tradeoffs that had to be made in the high-level design of our system. The LCD itself is much slower than a standard NTSC television display, so we did not have the option of updating the entire screen at 30 fps during operation. We had to draw as little as possible on each update of the screen. Also, because the Mega32 has a limited amount of on-board flash memory and we could not afford more with our budget, we could not make any games with a lot of map data, sprites, or varying backgrounds to store. Also, even though the LCD can support 4,096 colors, we had to stay in 256 color mode to keep it running fast.
There are no standards relevant to our design. All code in our project which was written by others was released under a GNU General Public License, so our code is also placed under this license. An issue of copyright concern would be the images and sounds used for the backgrounds, sprites and music in our games, which were based on sprites, images, and sheet music found on the web, but we believe that our work constitutes fair use since all music and images in our games are very simple digital representations. They are not direct copies and are only used for the purpose of demoing the complete project. If, however, this project became a mass-market product, all images and sounds in the system would have to be completely original.

In the process of developing three different games with unique functions for displaying on the LCD, our code became both complex and very meticulous. There are a handful of functions which serve only one purpose in a single game, but this approach allowed us to keep the logic for our three games separate and optimize for speed in every case.