Microcontroller
Microcontroller ‘s (MCU) is a kind of CPU (CPU) can be seen as. MIB MCUs from slower and less capable of addressing memory, but they are designed for the implementation of real-time control problems both cheaper and easier to use. The major difference between CPU and MCU are required to use external hardware. MCU, almost every time, except for a crystal or oscillator, no external equipment is required. If the CPU can not do any work without using external components. For example, arbirimi parallel communication, serial communication interface, memory as well as many additional hardware needs.
Some of the MCU instruction sets the standard MIBs, their speed and the CPU bulunabilirler.Bu in packages with additional features much more convenient and can be used as an MCU. There are four basic feature of a microcontroller. These are: speed, size, memory capacity, and some additional facilities offered.
Speed determines the frequency of the clock used mark and is usually measured in cycles per second million (Mega-Hertz, MHz). Different MCU ‘s and processors use to vary the speed would result in a different rate. Complex Instruction Set Computers (CISC)-complex instruction set computers with clock cycles that are required for the processing of a command for each command varies. Some commands, such as commands are completed in one clock cycle can be represented dozens of hours completed at the end of çevrimlari.
For this reason, CISC computers is not easy to say how fast they are. Reduced Instuction Set Computers (RISC)-RISC architecture, computers that have less and less a simple script that can perform a set of operations per clock cycle one or more of these commands can be implemented sahiptir.Genellikle. A large number of CISC to RISC instruction gerçeklenebilmesi command may be required.
Size is determined by the number of bits of the MCU can process in a single step. S are manufactured 4,8,16,32-bit MCU, but it s still the most widely used 8-bit word.
Personal computers memory MB (Mega Byte) Microcontrollers ROM size as measured by order of KB (Bin-Byte) ölçülmektedir.RAM by order of the values is about a few hundred bytes. Unlike memories microcontrollers use a desktop machine. Microcomputers memory is organized in accordance with Von Neumann architecture. So all program and data memory are the same. In contrast, many MCU memory organization is based on the Harvard architect.
In this architecture, a separate program memory (usually ROM, Flash or other non-volatile (permanent) memory is) the data is kept in memory and temporary variables are kept in a separate (usually internal or external SRAM). This is not just a functional separation (non-volatile ROM data, temporary data in RAM), but also provides access to the processor more efficiently separate memories.
Memory Structures
Programs on personal computers, magnetic hard disks, optical disks, or CD-ROMs saklarlar.Bu RAM to run executable programs transferred to their environment where programs are executed as needed. The program memory to store different types of microcontrollers. Disappeared and the renewal of the program on a regular basis the applied voltage is interrupted (refresh) a permanent memory codes to program MCUs amounts of DRAM instead of s.
ROM (read only memory) 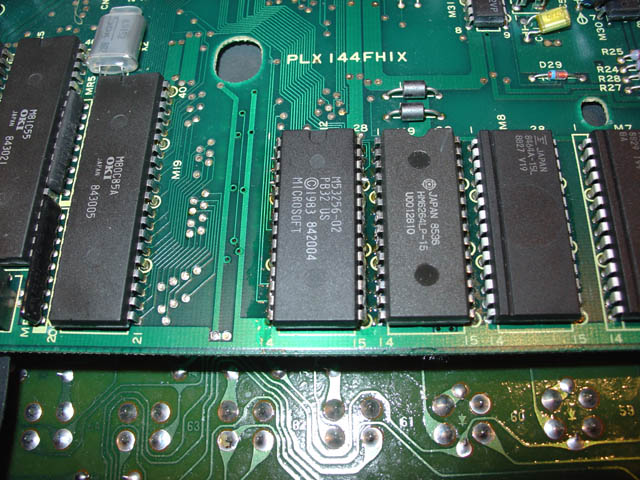 Read-only memory (ROM Read Only Memory) that allows data to be read, but the data contained in the memory is a type that is not allowed to be changed. Gerçekleştirilir.Bu read only memory programmed using special techniques such memories are usually cars, microwave ovens, washing machines, etc. systems are located in the MCU used.
Rom OTP (One Time Programable Rom)
Once these types of programmable ROM ‘s programming work to be made by the customer instead of the manufacturer with sağlar.Özel programming features, including a one-off ROM code loads the programmer.
Eprom
Erasable / Programmable ROM (Erasable / Programmable ROM), the ROM offers the ability to delete and re-programming. Deletion process is carried out with ultraviolet light and is carried out over a period of from 5 minutes to half an hour.
Eeprom

Electrically erasable PROM (Elecrically-Erasable PROM) ‘s programming and erasing operations at the same time because it is easier to use and slow the process can be done without wiping with a ultaviole light. EPROM and EEPROM is capable of specific programming. Programming can be performed approximately 1000 times.
For more detail: About Atmel and Combination Lock Application using AT90S2313 microcontroller

Animator is a device, rather 5 × 16 matrix LED , which are used to display simple animation. Initially, the device serves to...