Ardu-pong! the Arduino based pong console 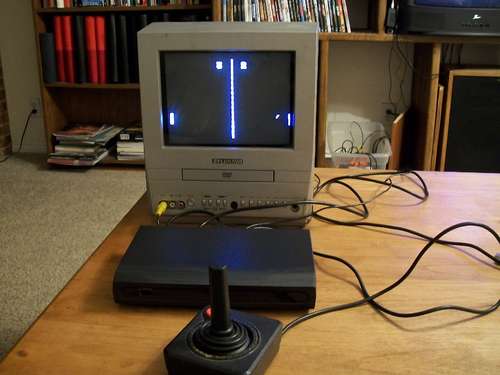 A while back the instructables robot made a post on Facebook about some guys who played pong on an Arduino (http://wayneandlayne.com/projects/video-game-shield/games/#pong)
but after looking around, i saw that everyone who did this was only worried about making it work. and often resulted as a very hard to use system with only potentiometers to use as controllers. so in my attempt at this, i decided that it needs to be much more polished if it is ever to be something of use. so heres how i did it:
UPDATE! ive managed to shink it down into an entire atari themed mint tin! check it out here

Step 1 Get the stuff.

so to do this, we are going to need a couple of things.
first off, we obviously need an Arduino, we are also going to need an atari joystick, a rs232 socket, a rca jack,  1Kohm resistor and a 330 ohm resistor, a switch for power, and something to cram all the guts into , i decided to use a busted digital tv receiver as my enclosure 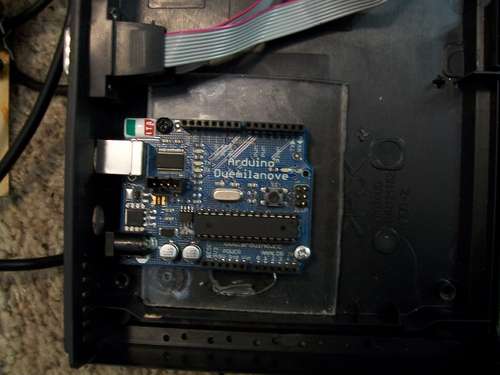 now take your chosen enclosure and take it apart and remove all the circuit boards and junk you otherwise will not need, then mount your Arduino against the backside of the enclosure and drill a hole large enough for a usb cable to fit through, then cut out a hole for the serial port to be mounted through.

before we install the rca jack we need to freeform the following circuit off of the pins of the rca jack .
then we can drill a hole in the back of the enclosure for the rca jack to come through and then glue it in place.

Here you can find out how to make you very own n as made for the exhibition www.laplandscape.co.uk curated by...