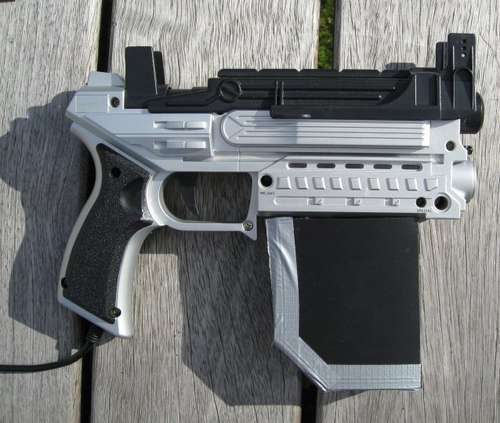 Duino tagger– General introduction
Duino tag is a laser tag system based around the arduino.
Finally a laser tag system that can be tweaked modded and hacked until you have the perfect laser tag system for office ordnance, woodland wars and suburban skirmishes.
Laser tag is combat game like paintball or airsoft without the pain, it uses infrared light (IR) to simulate the tagging / shooting of other players or targets.
I have been working on this project for a while, but don’t see it as over, I just though it was time to get more people involved. Hopefully this instructable will be near enough finished in time for me to enter it in the arduino competition, although I expect the instructable will need editing and tweaking for some time to come.
This instructable aims to provide you with the information you will need to go out and build your own duino tagger.
This instructable focuses on how to build a duino tagger by modifying a light gun but with a bit of extra work you could build you own gun from scratch.
This instructable does not look in too much detail at the software / code side of the project, although a working code based on the miles tag protocol is provided.
For those wishing to learn about duino tagger programming I suggest you start at the excellent tutorials found at A Terrible Idea.
Thoes experience arduino users will probably find the overview page (Step 1) and code pages (Step 8) the most useful, newer arduino users may need to take a closer look at the instructable and the links provided.
I hope many of you will find this instructable useful and will go on to build your own duino taggers. There is much scope for improving and upgrading this system outlined here. If you do go on to improve on this duinotagger please share your work and hopefully in time the system will evolve into a much richer gaming experience.
Youtube videos of my duino taggers:
This video shows me using the second duino tagger I made to shoot at a talcapult target I have been working on. I hope to make an instructable about the talcapult soon.
Demo 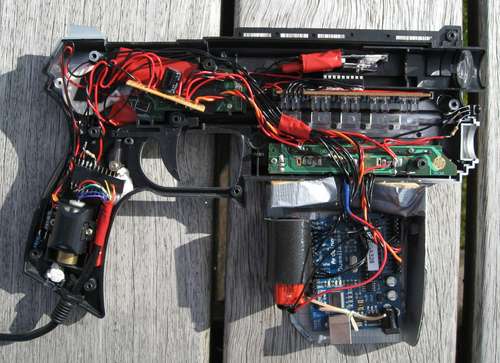 Overview
Key parts of a duino tagger:
IR Transmitter system
What – Transistor amplifier, high power IR LED and a lens to give a well focused IR beam.
Why – To give the tagger means of tagging / shooting other players as well as communicating game information. The transmitter amplifies the transmission signal from the arduino and transmits it using an IR LED, lenses are used to make the signal very directional in order to make the guns behave like guns and make long range transmissions possible.
Sound
What – Peizo Sounder (& mini sound recorder / playback electronics from greetings card)
Why – It’s nice to have some audio feedback from the system. Sound effects to let you know when the tagger has been shot or run out of ammunition or lives.
Receivers
What – Standard IR receiver module and power regulation capacitor
Why – So the gun knows when it has been shot. This design in this instructable looks at using 3 sensors 1 on the gun as well as front and rear head sensors.
Visual Effects and lights
What – LED’s and bar graph driver circuits
Why – It is nice to get visual feedback on game information, eg lights to let you know when you have been shot.
Cost
To make this section internationally friendly; at the time of writing: £1 GBP = $ 1.6 USD = 1.1 EUR
Assuming you already own an arduino the basic extra components for this project can be bought for around  £10.
Now is a great time to try to build a duino tagger as it is easy to get hold of cheap second hand light guns. Light guns are the guns that you can use with computer games, many of them don’t work with modern LCD screens and so there are a lot of them going cheap on ebay and else where. I bought two light guns each cost about £4 one off ebay one from a charity shop. Light guns are a great starting point for this project as they provide the optics, switches and case required for the build.
You will need:
Arduino
Light Gun
Coloured LED’s (preferably 30mA+)
IR sensors
At least 2x IR LED’s matched to the IR receiver  (preferably 100mA+)
Peizo sounder
Power transistor /MOSFET
A few electronics basics: solder, resistors , capacitors.
You may also want
Scrap plastic
LED bar graph driver chips
More LED’s
Record your own message greetings card
Hats / helmets / headbands to mount sensors on

Basics
Page to try to help the electronics noobs.
Some basics which are useful at several points in the design of the duino tagger.
R = Resistor
C = Capacitor
V = Voltage
I = Current
Using LED’s
LED’s must be used with a resistor to limit the current through them.
Choose the current the LED will work at
R = (V supply – V led) / I
Not: You will probably just be able to copy the resistor values I used.
Buttons
The buttons (triggers etc) in this project are assumed to give a low voltage when pressed. The standard circuit for this is show in the circuit diagram provided.
Filters
R C (Resistor Capacitor) circuits can come in useful at a few places in duino tagger, either for smoothing out changes in the power supply voltage or to turn PWM signals into analogue levels, not as complicated as it might sound:
To use the water analogy for electricity and current the resistor acts like a narrow pipe (imagine a straw) only allowing slow water (current) flow. The capacitor acts like a big water tank / bucket. The low pass filter in the diagram acts like a straw and bucket combo: Even if you suddenly change the flow of water in or out of the bucket the level (voltage) will only change slowly.
Cut off frequency for low pass: f = 1/(2pi*R*C)

Modding the light gun
The details of the light gun modifications will depend on the light gun.
Here are some general guidelines and ideas:
Useful parts to leave in the:
Switches
Trigger
LED’s
Lense
Adding storage space to your light gun: Fitting things in can be difficult, you might also not wish to put your arduino inside the gun. I wanted to be able to easily remove my arduinos from my duino taggers so I could use them in other projects.
On one of my duino taggers (MK1 gun) I cut holes in the case for the arduino nano pins to go through and mounted a socket on the inside of the gun so the arduino plugged on the outside of the gun. On my Mk2 gun I added an external case for the arduino and tried to make it look like an ammunition clip. The case / ammo clip was made from plastic I got from a cheap ring binder folder and its cover is held in place by a strong magnet.

IR transmitter
You will need:
IR LED: Look for an LED with a narrow viewing angle (to ensure as much of the IR light makes it through the optics).
Higher power the better.
Pick LED’s with a wavelength that matches your IR receivers.
Get some spare LED’s as they are operated above their rated current so may burn out.
You can just attach an IR LED (with a current limiting resistor) to an output pin on the arduino and it will be able transmit, but the range of the duino tagger won’t be very impressive. In order to improve the range of the duino tagger amplification is needed.
The basic amplifier I made was a simple transistor circuit (circuit diagram provided), you may wish to consider a mosfet instead of the transistor.
Current through the LED: I aimed for about 300mA current through the IR LED. This is more than the rated current for the LED, but the LED seems to be able to cope because you are only pulsing the high current for a short time. If you are using the 5V supply from the arduino to power the LED it can only provide about 400/500mA so using 300mA for the IR transmitter Led does not leave too much for the other LED’s and speakers etc, so bare this in mind when designing building your duino tagger, it might be a good idea to add a voltage regulator capable of supplying higher currents.
Optics
You will need to use a lense to focus the IR beam, you can use the lense that came with the light gun. You can use a red LED to work out where to put the IR led to get a good focused beam.
For more Detail: Arduino Laser Tag – Duino Tag

Ardu-pong! the Arduino based pong console

A while back the instructables robot made a post on Facebook about some guys who played pong on an Arduino (http://wayneandlayne.com/projects/video-game-shield/games/#pong)...