Posted By: Adminon: May 11, 2019In: Development Board - Kits ProjectsNo Comments
Print Email
Share this:

Tiny Basic Controller (TBC) is a simple device that can operate as a PLC (program logic controller) for home automation, control, etc. For example, this one can dial-up by modem to the remote computer and control the system, can control some processes, temperature regulation, battery charging, can be used for education and hobby purposes.

TBC is more analogue and discrete input / output and an RS232 interface to communicate with other devices and to reflect a control program.The control program is a text version of the BASIC language. The main task of the controller is to interpret BASIC commands. The TBC version of the BASIC language has the functions of discrete I / O, ADC and PWM. The view of controller PCB is shown below in the figure 1. 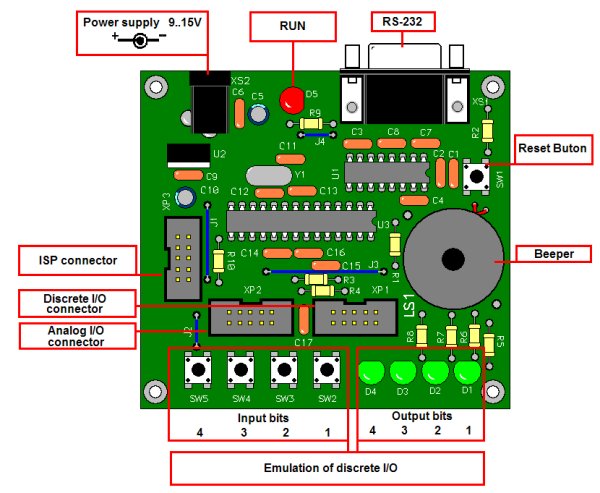 10-bit PWM has a frequency of 5.4 kHz.
10-bit ADC Conversion time is about 30 usec, but real sampling depends on the program loop.
Current through discrete outputs must be limited up to 20 mA.
Note that an LED is connected to each of discrete outputs. The current is about 8 mA per LED

The schematic controller is shown in Figure 2. 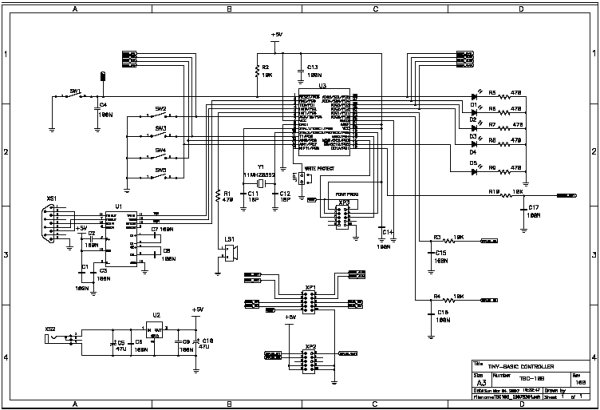 U3 is AVR microcontroller ATMEGA8.
The control program with thr BASIC interpreter for this controller is programmed by ISP after PCB is assembled. The firmware can be downloaded from here . We used the PonyProg programmer  connected via the connector XP3. The Figure 3 shows how the fuses should be programmed.

U1 is TTL / CMOS <-> RS232 transceiver
U2 is 5V voltage regulator
LS1 is a buzzer. This one can be any system caller. Make sure that the current drawn by pin U3: 5 is limited to 20 mA.
To prevent the user program from erasing there is the jumper JP1. When it is closed re-flashing of the user program is disabled.
LEDs D1 … D4 indicate state of discrete outputs.
LED D5 indicates the program state. When the program is run the D5 is turned on. When D5 is turned off it means that the program is stopped or waiting for the input (INPUT command) or a delay (DELAY command).
Push button switch SW1 controls the RESET line of microcontroller ATMEGA8.
Push button switches SW2 … SW5 are used as test signals for debug purposes.
To connect external circuits there are connectors XP1 and XP2.

TBC as a Black Box is shown on the figure 4. It is a good idea to use a socket for U3 then the full PCB can be used as a programmer for a minimal system based on TBC. The minimal system consists of AVR-microcontroller, three capacitors and a crystal oscillator plus the user circuit, of course.

The PCB layout is shown in the figure 5 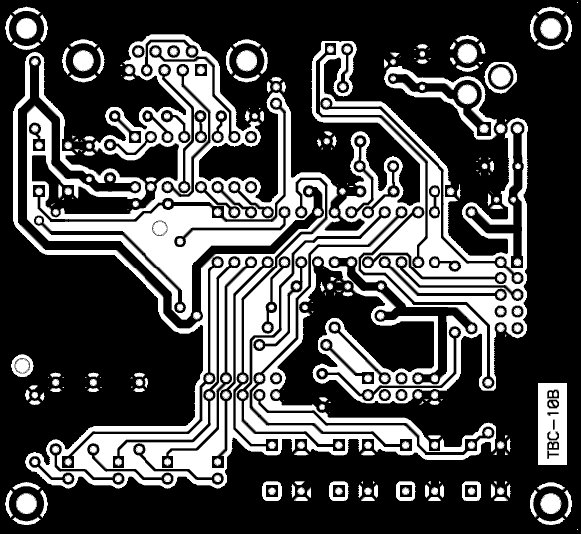 The assembly diagram is shown below 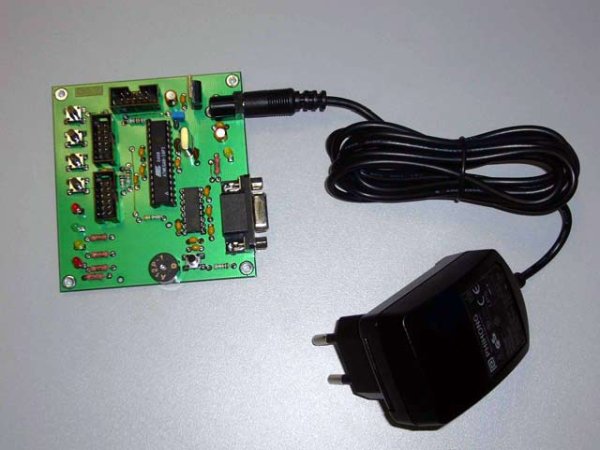 Specific pins control commands and commands SCALE and REM were added to the Tiny Basic specification.

Console input / output is the same as it was years ago. We can now use a PC with running HyperTerminal as a console. A console is required when programming or if the program uses the INPUT or PRINT commands.

HyperTerminal or other terminal application must be set up as shown below:

There are two ways to download. The first one is using the text file option option of the terminal. The second way is to use paste from the clipboard if you are using Windows HyperTerminal, for example:

1.Make sure that jumper JP1 is open.
2.Connect TBC to PC by RS232 cable.
3.Power it up.
4.Start terminal application.
5.Press the reset button on the TBC.

You now have one second to send SPACE or ENTER from the terminal. SPACE is for download BASIC application and ENTER is for current BASIC program. When the one second interval expired the current application starts. If you hurry to send SPACE, after the reset button is pressed, you will get the message “Reflash …” on the terminal of the terminal. You must send the program text by paste from the clipboard or text sending option. TBC outputs a “W” symbol for each 64-bytes blocked flashed during programming operation. If you press SPACE instead of Enter, just list the current program, just press the reset button to cancel the reflash operation. The method of working with the TBC and a console is shown below. At first you should create program text in the notepad. Then copy the whole text to the clipboard.

. There is a one second interval to send the SPACE symbol to the TBC to activate the downloading process.

Send text by terminal We can see the re-flashing process

When the re-flashing process is finished, the message “OK” is sent. To start the application, press the reset button, the application will run. You can see that you only need to have the simplest editor and terminal in your kitchen to program the TBC. You can use a palm on your PC as well. A PDA console is shown below: There are 26 variables denoted by the letters A through Z. These are represented internally as 16-bit, two-complement integers.

All operations are performed to 16 bits of precision. Arithmetic operations which overflow 15 bits of magnitude will cause an error message.

Note that comparison operators can not be used in expression.

Expressions are created with numbers and variables with arithmetic operators between them. Operations are performed with three levels of precedence. The first step is to perform Unary operations (+, -), then Multiplicative operations (*, /,%, &), additive operations (+, -, |). Within each precedence level, the value of an expression is computed from left to right. Parentheses can also be used to alter the order of assessment.

Label is a set from 1 to 3 digits. Labels must be set before line that is a point to jump or is a start line of subroutine.

Example 1. The program does an infinite cycle that reads the state of the console

Example 2. The program reads the state of the console and executes some background tasks. If there is a data in the console buffer, it execute the INPUT command to read the data and output it to the console.