One of the frustrating part in learning AVR microcontroller for the beginners is the AVR microcontroller programmer. The question is how to program my AVR mircrocontroller; actually if you googling on the internet and search for AVR ISP Programmer there are plenty information; start from simply using your PC parallel port to the sophisticated Atmel owned AVRISP mkII programmer. This will rise another question; which one should I choose? Well, if you are looking for the Atmel AVR programmer you have to consider how many AVR devices does this programmer software support and how this programmer hardware will connect to your PC/Notebook, of course the best and the complete one will be the Atmel own AVR programmer. 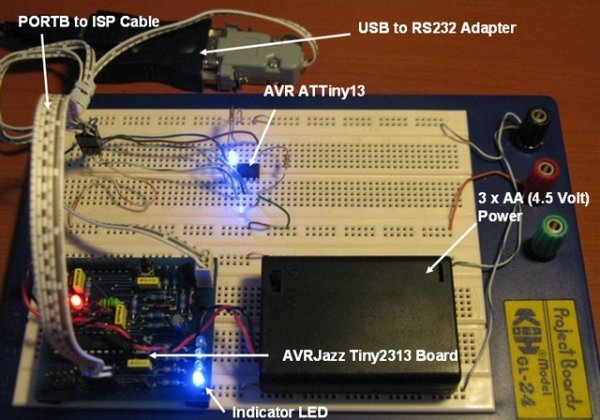 The well known open sources AVR ISP programmer is released by Atmel called AVR911: AVR Open-source Programmer (is that just a coincident they use the number 911, therefore you can see how important this topics is) and the hardware schema you could find on their application note AVR910: In-System Programming. The original schema use the old AT90S1200 and both the firmware (at90isp_ver23.asm) and the downloader (AVROSP.exe) only support a view old devices, fortunately there are peoples out there that keep this application note updated with the current devices.
In this project I will use the AVRJazz Tiny2313 board from ermicro as the basic board for the programmer and AVR ATtiny13 microcontroller as the target for the programmer. The firmware is taken from Klaus Leidinger at mikrocontroller-projekte.de and I made some modification to the source code, so it can work with AVRJazz Tiny2313 board; this little changes is mainly on the ATTiny2313 microcontroller type (originally AT90S2313), crystal oscillator frequency (originally 7.3728 mHz), the LED’s routines (originally using dual color LED attached to the PORT B3 and B0) and the healcheck function to blink the board’s LED 5 times when it start. For the complete source code and the hex code you can download from here.
Although the firmware can work very well with the Atmel’s AVRPROG that come with the AVR Studio 4 (from menu Tools -> Avr Prog…), but this programmer only support a view devices; beside Atmel look likes will not update this program anymore, the last time they update the AVRPROG (version 1.40) mainly just for supporting their new AVR Butterfly evaluation board which is using ATMega169. Therefore I choose AvrOspII from Mike Henning for the latest windows programmer version that supporting the AVR911 protocol; this programmer software support mostly used AVR microcontroller devices.
The following is the hardware diagram, cable connection from PORTB AVRJazz Tiny2313 board (see the AVRJazz Tiny2313 schema above) and the schema for ATtiny13 used in this project: 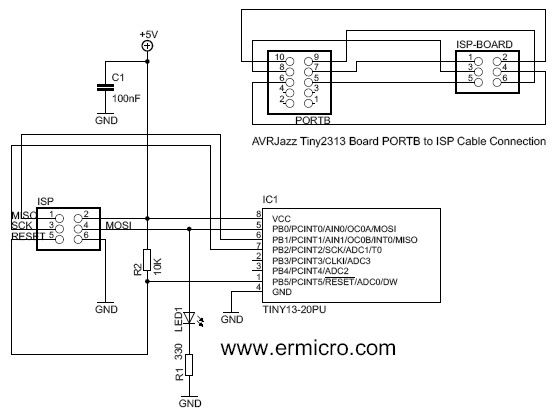 Welcome to the first post of the “Exploring Eagle CAD ULPs” series. Every week we will publish a new post...