We created an RC Car that can identify a parking space and parallel park by itself. The RC Car drives down a street searching for a parking space to its right using a distance sensor. When the car has identified a space, the car checks to see whether that space is large enough to park in. If it determines that there is sufficient space, the car will begin parallel parking into that space. It uses information from sensors placed on the front, right, and rear of the car to direct the car into the parking space. Once the car has parked, it will remain in that position until it is reset. 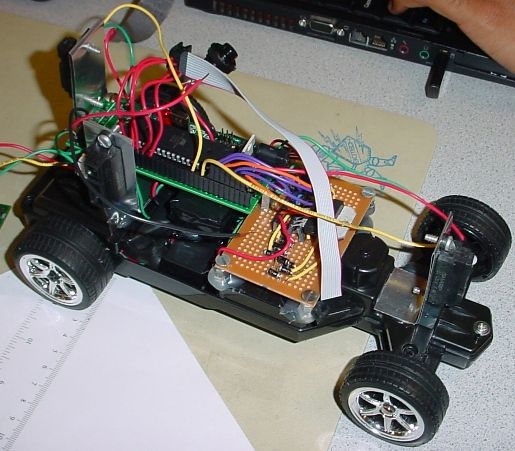 After discussing various project ideas, we eventually stumbled onto the subject of cars. So we started brainstorming possible projects related driving. When brainstorming, we saw something in the ECE lounge that reminded us of a garage. This led us to parking. Parallel parking is something that many drivers struggle with, yet there are very few tools available to help with parallel parking. Though a few auto manufacturers have developed systems that can parallel park cars autonomously, these solutions are very expensive. We thought this would be both a fun and interesting problem to tackle using an RC Car as a proxy for a real car.

The control system contains all the hardware and its associated software. It allows the parking and parking detection algorithms to interface with the car. The software in this module is broken up into three major sections: the Left-Right/Front-Back (LR/FB) state machines, master state machine, and distance calculations. The LR/FB state machines determines which direction to move the car based on flags set by the detect parking space and park car algorithms. Once the LR/FB state machines decides which direction to move the car, the master state machine implements this movement by sending the correct input and enable signals to the H-Bridge. The distance calculations implemented independently every millisecond.

The first step of our hardware design involved fully understanding the mechanics our RC car. We took apart the car and rebuilt it multiple times to fully understand how it was built, what every part in the car is used for, and how those parts contribute to the control of the car.
After understanding the mechanics of the car, we decided the easiest way to control our car would be to directly control the inputs to the DC brush motors controlling the front and rear wheels, bypassing all of the car�s internal circuitry. To do this, we scoped the control signals of the car. We found that the control signals were very simple. There is one motor for the reverse and forward movement of the rear wheels and one motor to turn the front wheels left and right. These motors are controlled by a simple 5V DC input. A +5V turns the rear wheels forward and the front wheel to the left. A -5V input turns the rear wheels backwards and turns the front wheels to the right. To more easily control the motors we soldered wires to their plus and minus terminals. This allows us to easily apply a +/-5V without opening up the car again.

We use an ST Micro L298HN H-Bridge to control the motors of the RC Car. It allows us to switch between +/-5V across the motor. It also allows us to source the power from the batteries while using the processor to control the transistors in the H-Bridge. The control algorithm turns the appropriate transistors on/off, applying the proper voltage across the brush motor. The H-Bridge is connected using the following configuration:
The first H-Bridge (to the left) is used to control the front motor of the car. This motor turns the front wheels either left or right. The second H-Bridge (the the right) is used to control the rear motor, which is used for the forward and reverse functionality of the car. The inputs and enables of the H-Bridge are connected to port B.

Table 2: H-Bridge Pin Configuration
In addition configuring the H-Bridge to control the motors, we also had to protect the H-Bridge from inductive spikes caused by turning the DC brush motors on and off. We used diodes on the output to protect from these spikes.

We used three Sharp infrared distance sensors to determine the distance between our car and nearby objects. We placed a sensor on the front, the right side, and the rear of the car. For the front and rear, we used 4-30cm sensors. For the right side, we used we used a 10-80cm sensor. We decided to use a sensor with a larger range for the side so that we could more easily detect a parking space. However, this made aligning the parking the car more difficult, so we rely more heavily on the front and rear sensors to park the car. To slightly improve the short distance range of our sensors, we placed the sensors as far back on the car as possible.

The challenge with using these sensors is that their voltage output is nonlinear (inverse function) and each sensor varies slightly. Therefore, we scoped the output of each sensor at various distance values, linearized the plot, curve fit the line, and implemented an analog to digital conversion so that we had reliable distance values.

Introduction and Motivation In the tennis and sports equipment market, there are very few advanced electronic devices assisting in the...